Our 9 Favorite Places To Eat At Disney Springs 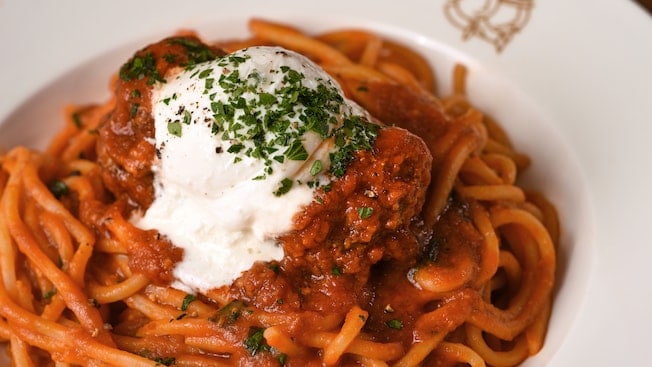 Like many restaurants and venues at Disney Springs, this establishment takes on a fun theme and alluring backstory. It details the days of old when the existing edifice was used as a functioning power plant circa the 1920s. It has since been repurposed from previously providing the town’s primary source of power to providing diners with the fuel and power they need via enticing culinary innovations. And upon entering you can still see all the industrial remnants and machinery that served many former purposes. Now it’s the place for palatable new inventions. Just some of the many great gastronomic discoveries that have been concocted here include DB “Clothesline Candied Bacon” (served on an actual miniature clothesline), Electri-Fries, the Lightning Shrimp Cocktail, Southern Electric Chicken, Old-fashioned Meatloaf and Gravy, Scottish Salmon, 28 Day Dry-Aged Prime Rib, the Coney Island Diner Dog, and much more, along with various salads and creative sides. The Quadruplex Potato  and Menlo Park Mac & Cheese are two such examples of the latter. And don’t forget about the restaurant’s own signature Edison Burger—a reinvention of the great classic, comprising of sirloin, short rib, brisket, sharp cheddar, onion rings, smoked bacon, house-made pickles, lettuce, tomato, and Edison Special Sauce. Put a shockingly sweet end to any meal with one of many fabulously designed dessert innovations. Such examples include the popular Lollipop Dessert Tree, Black Cherry Cream Shake, Great Big Rocky Road Shake, Banana Split, Kate’s Chocolate Mousse Cake, Key Lime Brûlée, Casey’s Apple Cobbler, and various ice cream and sherbet options. And as is the case with many venues, The Edison also features a vast array of drink accompaniments, from beers, wines, ciders, and even specialty cocktails both with and without alcohol. While the spot is one for family-friendly dining and even entertainment throughout the day, at 10 p.m. it becomes site to an adults-only bar and cabaret scene with live music, stage acts, flapper-style entertainment, and all that other jazz.

Also sharing neighborly space with the grand Edison edifice is Maria & Enzo’s Ristorante. This delightful new venue, specializing in Italian cuisine, contributes its own unique storyline to the Disney Springs scene. According to legend, this was once the site for the old Disney Springs air terminal. When the terminal was eventually closed down at some point during the golden age of air travel, Maria and Enzo, who were two bakery workers with their own small shop at the terminal, decided to buy out the entire area and pursue their life’s dream of one day opening their own Italian restaurant. So it should come as no surprise that the restaurant is an open, spacious area resembling an airport layout. You will even notice all the old-time travel advertisements still lining the walls all throughout. And that former bakery space Maria and Enzo once inhabited has since been converted to the adjoining counter service pizza place known as Pizza Ponte. Enzo’s Hideaway Tunnel Bar is another adjoining establishment modeled after a speakeasy and giving way to a fun representation of the Prohibition Area. While each place sports its own one-of-a-kind theme, Maria & Enzo’s, Pizza Ponte, and Enzo’s Hideaway are all part of the Patina Restaurant Group. Quick and casual offerings categorize Pizza Ponte, and smaller-platter lounge and drink pairings make up Enzo’s Hideaway, but Maria & Enzo’s delivers on a host of refined signature delights. Start off with delightful appetizers, soups, and salads, with such favorites being Arancini, Calamari, Sicilian Vegetable and Bean Soup, and Burrata Caprese salad, to name a few. There are a wide range of well-known pasta dishes to enjoy here as well, from classic Spaghetti & Meatballs to Three Cheese Ravioli, and other hits like Linguine & Clams, Rigatoni “Norma,” and Sicilian Oven-baked Pasta. Other delightful entrée selections range in steak, fish, chicken and eggplant. At lunchtime there are also a variety of sandwiches offered. Dessert takes on many forms, including Cannoli, Gelato e Sorbetto, Cassata Siciliana (a traditional Sicilian ricotta-layered sponge cake), Enzo’s Torta (a signature of chocolate and mascarpone cheesecake), and Affogato di Vesuvio, comprised of gelato, espresso, chocolate whipped cream, and white chocolate snow.

One of the mutually agreed-upon favorite establishments making up the dining scene in Disney Springs is none other than Chef Art Smith’s Homecomin’. It’s all about celebrating hearty southern cuisine traditions done via freshly sourced farm-to-fork ingredients from surrounding regional farms, ranches, and fisheries. It was renowned celebrity chef Art Smith who made it all possible, having started this new venture upon returning home to his native Florida, hence the name. And living up to his enduring reputation for supremely scrumptious food, it’s no wonder that Chef Art Smith’s Homecomin’ is a popular place sure to suit any palate. From salads to sandwiches and a host of perfectly portioned plates, some of the items here that are all the rage include the Art Burger, Key West Shrimp Cocktail, Church Lady Deviled Eggs, Bee Haven Bay Fried Green Tomatoes, Art’s Famous Fried Chicken, House-made Doughnuts, the Chopped Pork Barbecue Plate, Addie Mae’s Chicken & Dumpling Soup, Shrimp & Grits, Thigh High Chicken Biscuits, Braised Short Ribs, Capitol Meatloaf, Florida Grouper, and several others. Soulful sides add the perfect touch with options ranging from Cheddar Cheese Drop Biscuits, Grilled Corn Succotash, Mamma’s Mac and Cheese, Southern Slaw, Carrot Soufflé, a Basket of Fries, or KC Greens: Braised Kale and Collards. In addition to serving up comforts at lunch and dinnertime, Chef Art Smith’s Homecomin’ also offers a special Sunday morning Rise n’ Shine Brunch between 10 a.m. and 2 p.m. Here they feature an array of delectable options, some of which include Hush Puppy Benedict, the Hallelujah Biscuit, Fried Chicken & Doughnuts, Short Rib Hash, the Grand-daddy Plate, and more. There are also specialty drink offerings to accompany any meal, from handcrafted moonshine cocktails to plenty of other spirits. There are various ways to sweeten the end to any meal as well, including the kids’ menu favorite of Doughnuts and Ice Cream dessert or the Grab & Go specialty Shine Cake—the chef’s own specialty moonshine cake.

Disney Springs boasts a seemingly boundless array versatile eats in addition to the ones we’ve highlighted here. Venues range from quick service to fine dining, profiling many different tastes, themes, cultures, and even special dietary options as well. So you may rest assured that when visiting Disney Springs, you will be well taken care of—from the very tips of your taste buds to that satisfied and refueled feeling you get in your stomach after indulging in the finest food around.