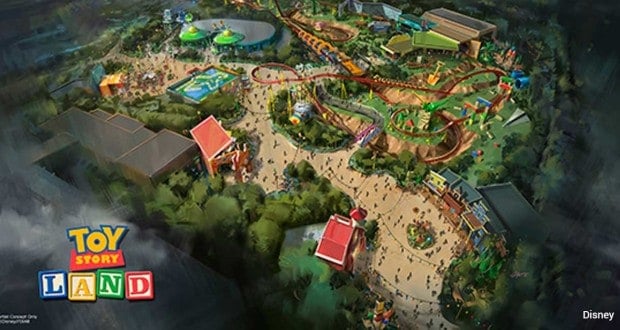 There seems to be no end to the announcements coming from D23, Disney’s Expo event in Anaheim, CA. Here, fans can get the latest scoop on what’s new on the Disney movie, parks and activity fronts. The newest buzz to come from this special event is that Disney’s Hollywood Studios in Florida will be adding a new section based on Toy Story!

“The reimagining of Disney’s Hollywood Studios will take guests to infinity and beyond, allowing them to step into the worlds of their favorite films, starting with the all-new 11-acre Toy Story Land. Guests will become part of the adventurous outdoors of Andy’s backyard, including two new Disney Parks attractions and one expanded favorite.

Family-friendly roller coaster – This coaster will zip and zoom, plunge and coast as it takes guests on a thrilling, toy-filled adventure throughout the new land on the back of Slinky Dog.

Alien saucers attraction – The famous little green aliens from the movie will take guests around for a spin in their very own flying saucers.

Toy Story Mania! – Guests glide into the Toy Story Midway Games Play Set and take aim at 3D objects in a variety of fast-paced games, with an expansion that adds an additional track to this popular attraction.”