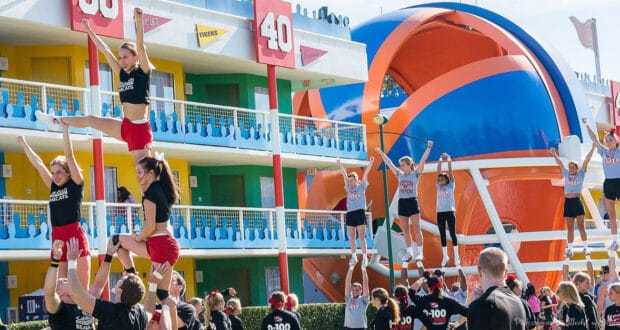 Pop Warner’s annual Super Bowl and National Cheer and Dance Championships is typically held at Walt Disney World. They have announced they will be moving down the road and partnering with Florida Citrus Sports to make Universal Orlando Resorts and Camping World Stadium the new home of Pop Warner national championship week.

As report on Pop Warner’s website: Pop Warner Little Scholars, the nation’s oldest and most prominent youth football organization, and Florida Citrus Sports announced that Orlando will continue to play host to the historic Pop Warner Super Bowl and Cheer & Dance National Championships, which combine to draw 10,000 Pop Warner student athletes and their families from around the country and internationally each December. Under the new long-term agreement, the 60,000-seat Camping World Stadium, which has hosted the NFL Pro Bowl and major college bowl games, will be the feature field during the Pop Warner Super Bowl. Additional games and practices will be held on fields on the expanded stadium campus in Orlando. Universal Orlando Resort will be the new host to Pop Warner families staying in Orlando and the award-winning theme park destination will host the spectacular Pop Warner party during championship week.

Why is Pop Warner’s Super Bowl and National Cheer and Dance Championships switching from Disney to Universal Orlando Resorts and Camping World Stadium?

A: We continue to have a great relationship with Disney and are sure families will visit the parks that week. While Disney has played host to our Pop Warner Super Bowl and National Cheer & Dance Championships for years, our partnership regarding championship week came to a pause when the COVID-19 pandemic struck in 2020. We were putting final touches on a new agreement when Disney was suddenly tasked with hosting and creating a bubble for professional leagues like the MLS and NBA at their ESPN Wide World of Sports complex. With so much uncertainty it was difficult for Disney to commit to the future and because our first priority is our Pop Warner members, we decided to start searching for a new location to ensure our teams had a first-class Championship home. Luckily, we did not have to look far and found a highly experienced and well-respected partner in Florida Citrus Sports and an exciting new location at Universal Orlando Resorts and Camping World Stadium, both of which we think will offer some amazing, new experiences for our athletes and their families.

Sounds like a big decision and a big move. What are your thoughts?