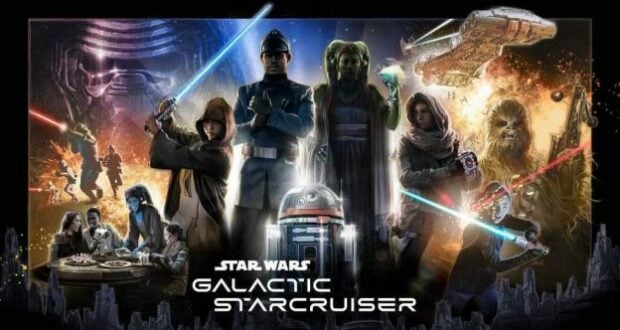 Soon enough Star Wars fans will have a chance to experience a resort experience like never before! An all-immersive adventure is coming to Walt Disney World in 2022 called Star Wars: Galactic Starcruiser. Star Wars: Galactic Starcruiser will invite guests into a new kind of “storyliving” as they travel the galaxy in a starship. Disney is now providing an in-depth look at what guests can expect during their two-night journey with a new promotional poster.

Disney shares an in-depth look at what we can expect in 2022 when Star Wars: Galactic Starcruiser sets off for a galaxy far, far away by breaking down the details found in the promotional poster above:

Does this leave anyone else super eager to know MORE?! We’ll be sure to release all the details as soon as Disney provides them, including an opening date… and the number one question from many Disney fans… how much is this going to cost me? In the meantime, visit starwarsgalacticstarcruiser.com to learn more about this one-of-a-kind “storyliving” experience!