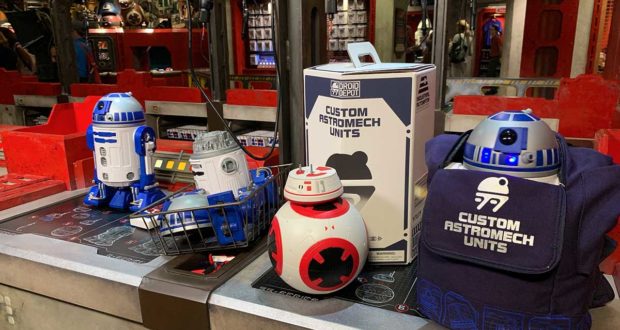 For years you’ve been able to custom-build many things from the Star Wars universe from lightsabers to pocket-sized droids. But with Star Wars: Galaxy’s Edge, you can actually assemble a custom Astromech Unit. In other words, a Star Wars droid!

The Droid Depot is fully stocked with all the parts you need to build the ideal companion for your exploration of Batuu. The really exciting part? You get to build it yourself! Check out all the ‘parts’ of this article to find out why this workshop is easily one of the best experiences in Star Wars: Galaxy’s Edge.

8. You Can Build Your Own Droid

Feeling a little concerned for C-3PO after that part of the awesome new trailer for The Rise of Skywalker? So are we. But don’t worry, because you can lessen the inevitable blow by building your own personalized droid to console you post-viewing (just sadly not in the C-Series).

Once you’ve chosen the series for your droid, the workshop’s conveyor belt will offer all the parts. These include body spheres for the gyroscopic BBs and center legs for the trashcan-shaped Rs. You’ll then head over to a Build Station where you’ll no doubt put young Anakin Skywalker to shame!

At $99.99 per unit (plus taxes), it’s reasonable to say that prices aren’t extortionate. If you disagree, just take a moment to realize what it is you’re parting with your hard-earned money for: an actual droid unit that interacts with its environment!

The price also includes a carry box and instructions. Other items, however, such as variable personality-affiliation chips and other accessories do cost extra. But at least the prices are fixed, meaning you won’t need to haggle with Watto for spare parts.

There are simply no two ways about it. Sure, cats and dogs are cute too, but Astromech Units don’t pee or poop or whine and they never grow old. Okay, they can hardly be described as or compared to pets, but a loyal and trusted companion they are nevertheless!

This is why they’re recommended for age 3+, as they’re perfect for both young Padawans and Jedi Masters alike. Droids are simply adora-ball. You can’t go wrong with your own unit, and who knows – with all sorts of scum and villainy in Batuu you might just need one. If you want something a little more remarkable, the life-sized R2 unit pictured above can be yours or $25,000!

Not only is the actual process of custom-building your own droid by default a completely immersive experience, but the Droid Depot workshop itself looks like something straight out of one of the movies. Yes, it’s that realistic!

It’s not just about having your own BB or R unit, though – it’s also about the experience itself. In fact, you can easily convince yourself you’re on a dusty old planet like Tatooine when you’re in here (except you’re actually on Batuu and there’s some notable distance between the two).

4. You Can Control The Droids

Once your droid has been built, you’ll be given a remote control! Why? Because the droids use Bluetooth technology in order to communicate with both their masters and other Astromech Units, along with other elements of Batuu and Disney World beyond.

Using the remote control function while in Disney World, however, is forbidden. You can carry your droid around Batuu, though, so that you can enjoy watching it interact. Just don’t go putting it on your shoulder like BD-1 in the awesome new platform game Star Wars: The Fallen Order.

3. They Interact With Their Environment

As all droids do, your own unit will interact with certain elements of the environment, whether you’re in Batuu or elsewhere in the resort. Not only that, but they’ll also interact with other droids (and will hopefully be friendlier with one another than C-3PO or R2D2!).

If you don’t understand what they’re saying to one another, though, it’s tough luck. Unless of course you’re as multi-lingual as C-3PO (oh every time we mention his name we get all teary-eyed…). We are not looking forward to taking “one last look” at our shiny friend…

When you’ve finalized your BB or R-unit, it will be ready to leave with its new master. But before doing so you can purchase additional accessories for them. Equally, you’re also free to return at any time to do this, so there’s no pressure whatsoever.

And it wouldn’t be a workshop without upcycled objects made from old parts, or existing premade droids. Whether or not you choose to upgrade your droid or purchase a premade one to begin with is your choice. Either way, you’ll just love the Droid Depot.

1. The Attention To Detail Is Force-Some

After entering through some rusted blast doors, you might simply browse or waste no time in selecting the droid series you want. You’ll then head over to a Build Station, where you’ll be given assembly instructions to follow via monitor display schematics.

The Depot clerk will also be dressed like a real Batuuan, adding to that immersive touch even more. And when your droid finally comes to life, it will do so in a light-blinking fashion! It’s fair to say that no piece of scrap has been left unturned at the Droid Depot.

Reservations can be made up to 180 days ahead of your visit. But just be sure to become part-droid yourself and download the My Disney Experience app to make those reservations or check availability.