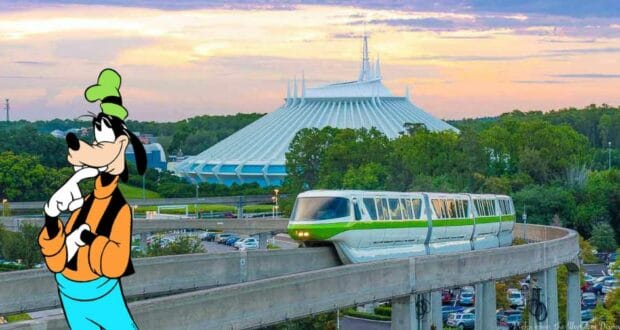 You’ve had the most incredible Disney experience at Magic Kingdom Park. If you’ve opened and closed the Park, you’re likely beyond exhausted and ready to get back to your car and head home. BUT… have you SEEN that Disney Monorail wait? Here’s a trick you don’t want to miss!

When visiting Walt Disney World Resort’s iconic Magic Kingdom Park and planning on driving, Guests will be parked over a mile away from the entrance to the Park at the Magic Kingdom parking lot called the Transportation and Ticket Center (“TTC”).

After parking your car, you’ll take a tram to the TTC hub and choose to ride either the ferry boat or the Monorail to the Magic Kingdom Park entrance.

The arrival at Magic Kingdom Park isn’t all too bad, but when it comes time to exit the Park when the fireworks end and it closes to the public… that’s when things get difficult! Mass amounts of people rush to the exit.

If you’re staying at a Disney Resort hotel, the buses are readily available to send Guests back to their Resort hotel rooms. But, if you need to get back to your car, the lines for the Monorail and ferry boat to the TTC are rather overwhelming.

What most Guests don’t know is there are two Monorail lines at Magic Kingdom Park. Both are located at the front of the Park with the lines right next to each other. One line is a direct line to the TTC, while the other is called the “Resort Monorail.”

RELATED: Only 30 Minutes? Is Disney’s ‘Early Park Entry’ Perk Really Worth It?

The Resort Monorail line takes Guests around the Seven Seas Lagoon, to and from the Magic Kingdom Resorts, including Disney’s Contemporary Resort, Disney’s Polynesian Village Resort, and Disney’s Grand Floridian Resort. What most Guests don’t know is that it also stops by the TTC!

The Disney Park trick we use rather often is the skip the TTC Monorail and ferry boat lines and go to the MUCH shorter Resort Monorail line.

Once onboard the Resort Monorail, Guests will leave Magic Kingdom and stop at Disney’s Contemporary Resort. Just remained seated. The next stop is the TTC!

RELATED: No More Extra Magic Hours? What to Know About ‘Extended Evening Hours’

Even though the TTC Monorail is a direct route from Magic Kingdom to the TTC, you’ll likely still save a TON of time at the end of the day by skipping the TTC Monorail or ferry boat crowds and instead heading directly to the Resort Monorail with just one extra stop before the TTC.

It’s a super easy Disney World transportation trick to ending your day without following the mass exodus to the TTC. Happy planning with this Disney World tip in mind, Disney fans!