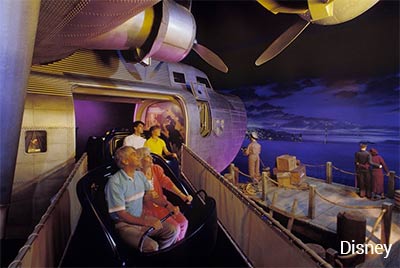 There is just something about these vintage Disney attractions and their theme songs. I could sing the Dream Flight song for you in its entirety, I remember the evocative melody that well. Whether you remembered this attraction originally titled If You Had Wings or the second remake If You Could Fly, this ride was a pop-up book version of the history of flight featuring theatrical sequences, simplistic sets, Audio-Animatronic scenes, and projection effects. I remember the overhead voice announcing, “Ladies and Gentlemen. Your Dreamflight will depart immediately for the future. Please prepare for supersonic takeoff” and then moving through a room with fog and a spinning light only to enter a giant, film-projection room simulating flying through the sky as if you were in an airplane. My nostalgia is heavy for this ride that departed in 1996 and a few years later was replaced by Buzz Lightyear’s Space Ranger ride in Tomorrowland’s Magic Kingdom.