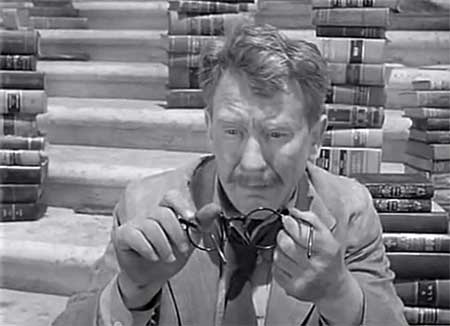 7. A Nod to Twilight Zone Episodes

The Imagineers pay homage to many of the Twilight Zone episodes with objects and details scattered throughout the attraction. A reference to the episode “Time Enough at Last” is made with a pair of glasses found in the lobby that contains broken lenses. In the episode, a man named Henry loves books but is prevented from reading them by the people in his life. When he becomes a lone-survivor in a post-apocalyptic world and has all the time in the world to read his beloved books, the lenses in his glasses shatter leaving him virtually blind. There are many other references too. The Library contains a book titled To Serve Man, taken from the episode of the same name. There is an inspection certificate to the left side of the elevator as you board which is signed by “Cadwallader,” who is a character from the episode titled “The Escape Clause,” eventually revealed to be the devil. As the elevator rotates towards the exit after your final drop, look for the slot machine (a nod to the episode “The Fever”) and a creepy ventriloquist’s dummy (a nod to the episode “Caesar and Me”).