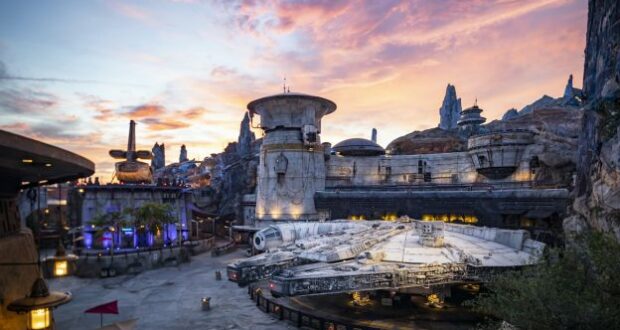 Aug. 29, 2019, is a day long remembered at Walt Disney World Resort, as it saw the grand opening of Star Wars: Galaxy’s Edge at Disney’s Hollywood Studios. This past Saturday marked one year since the land’s debut, so DisneyParksBlog joined a crew that traveled to Batuu to see how visitors to this galaxy far, far away spent the day.

We arrived before dawn to watch a beautiful sunrise over the Millennium Falcon, docked in the Black Spire Outpost spaceport.

We met many travelers from across the galaxy. Some built their own astromechs in Droid Depot, while others stopped by the garage to check out some landspeeders, explored the outpost’s marketplace or found some fascinating items in Dok-Ondar’s Den of Antiquities. One young man even appeared to be sensitive to the Force …

Rey and Chewbacca made connections with potential new Resistance members at the outpost’s garage.

And Resistance spy Vi Moradi managed to find a good hiding spot to avoid being seen by First Order Stormtroopers.

We also enjoyed just wandering through the land to soak in all its spectacular sights – both big and small.

If you want to see more from Saturday at Star Wars: Galaxy’s Edge, head over to @disneyparksblog on Instagram, where later today Ashley Eckstein, the voice of Ahsoka Tano from Star Wars: The Clone Wars, will be posting updates from her trip to Batuu this weekend.

And in case you missed it, we recently posted special 360-degree views inside two of the most popular locales in Black Spire Outpost: Oga’s Cantina and Dok-Ondar’s Den of Antiquities. Check them out here.