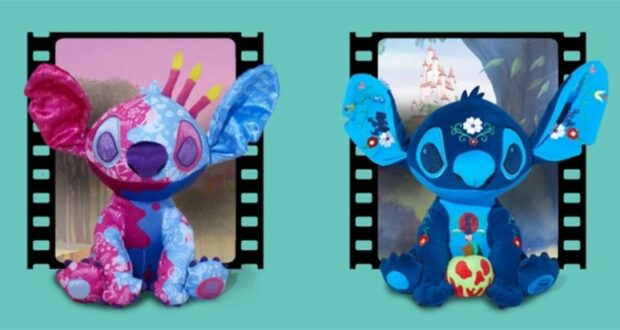 Calling all Disney collectors! Exciting news from shopDisney as we have now learned the date for the 7th series in Stitch Crashes Disney Collection has been announced. On top of that news, Disney has also revealed a first look at the 8th Stitch in the 12 part series. So far, we’ve already seen Stitch crashing Beauty and the Beast, Lady and the Tramp, The Lion King, The Little Mermaid, Pinocchio, and Aladdin. Soon, we’ll have a chance to snag Stitch Crashes Sleeping Beauty and Stitch Crashes Snow White and the Seven Dwarfs.

On top of the release date for Sleeping Beauty Stitch, shopDisney has also provided a first look at Stitch Crashes Snow White and the Seven Dwarfs Series 8 of 12. “COMING SOON: Series 8 of 12, This collection will not be released at US Disney stores”. We’ll be sure to share a release date as soon as shopDisney shares the news.

What’s to come in the Stitch Crashes Disney Collection? While we don’t have photos of what these Stitches will look like just yet, we do know the incoming films will include Stitch crashing Jungle Book, Pocahontas, Peter Pan, and Mulan. Are you an avid Stitch Crashes Disney collector? If so, get ready to add Stitch Crashes Sleeping Beauty to your collection – with Snow White and the Seven Dwarfs to follow!