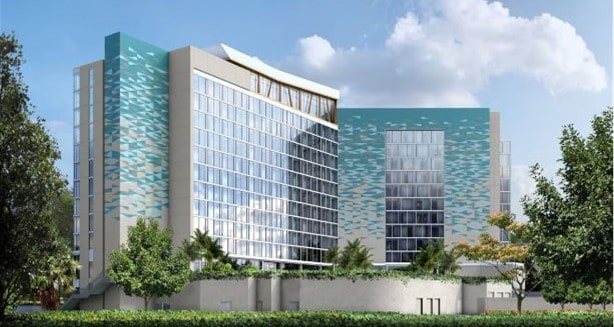 We’ve been watching the construction of the new Walt Disney World Swan Reserve with a look at aerial photos of the construction, along with details when the resort was first called “The Cove” before the name changed to “Swan Reserve”. Marriott has now shared more photos and details along with an estimated July 2021 grand opening!

As shared on Marriott.com: “Situated in the middle of the magic, The Walt Disney World Swan Reserve, an Autograph Collection Hotel, provides a luxurious yet tranquil oasis to attractions and theme parks at Disney. With Disney’s newest attractions including Disney’s Hollywood Studios’ Star Wars: Galaxy’s Edge within walking distance, guests can flow effortlessly from the excitement of the theme parks to the relaxation of a lavishly appointed hotel room or suite perfect for families of 6 to 10. Complimentary transportation is provided throughout Walt Disney World Resort, including to Magic Kingdom and Disney’s Animal Kingdom. As an added benefit, guests enjoy full access to all amenities of the Walt Disney World Swan and Dolphin Resort, including special Disney benefits. The Walt Disney World Swan Reserve truly is like nothing else, located like nowhere else.”

Check out the stunning photos from Marriott in the photo gallery here:

Anyone else super excited to stay at this STUNNING resort? We’ll be sure to bring you more details as they are released from Marriott.