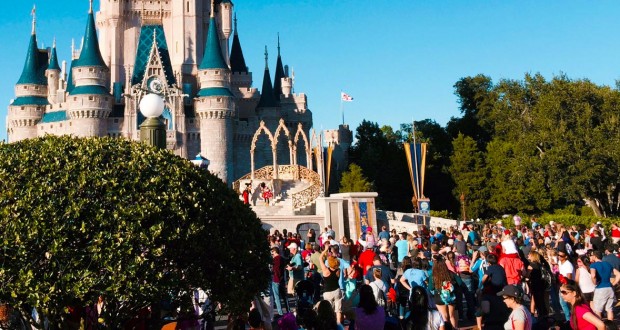 Top 11 Most Crowded Times of the Year at Disney World

If you are considering a trip to Walt Disney World in Florida, perhaps your biggest decision will be when to go. Crowd levels fluctuate throughout the year, usually in conjunction with the school year. Believe it or not, there are advantages to going during busy times. Crowds are high at certain times for a reason. Something exciting is happening at Disney! Think Christmas and New Year’s, with all the parties and decorations. Also, the busy season means almost everything is open and operating at peak efficiency. On the down side, you must be ready to deal with the increased crowd levels. Whatever you decide, it’s best to be informed.

11) Pop Warner Week – Pop Warner week is more of a mythological problem than a real one. It is the first full week of December–when Disney hosts Pop Warner football and cheer and dance championships at its ESPN complex. As a result larger numbers than usual of loosely supervised adolescents loudly populate several of the resorts–typically the All-Star resorts, but also a moderate or two. Evening crowds in the theme parks are a tad higher than they otherwise would be (the kids and their families compete during the day).

10) Gay Days – Gay Days Orlando, the first weekend in June, attracts big crowds to the Orlando area every year. Overall, Disney World does not experience a crowd spike due to this event, but specific theme parks will see increased attendance. Check the Gay Days Orlando schedule for specific information.

9) Jersey Week – “Jersey Week” is a partly mythical, partly real crowding phenomenon in early November at Walt Disney World. Each year, the New Jersey Educational Association holds a convention that includes a Thursday and a Friday, typically the first full week of November. New Jersey public schools are closed those two days; many families in response head to Walt Disney World for either that long weekend, or for the entire week. Consequently, Walt Disney World is more crowded during Jersey Week than it is the weeks before and after.

8) October/Columbus Day/Food and Wine – Several events in early fall come together to increase crowds, at least moderately. Mickey’s Not-So-Scary Halloween Party starts in late September and runs through October; Epcot’s Food and Wine Festival runs from early October through mid-November (crowds spike on the weekends, as locals come out); and Columbus Day is another 3-day weekend to entice vacationers.

7) Memorial Day – Unofficially, this holiday weekend is the start of the busy summer season. Many schools in the south are out for the summer and families try to beat the rush to Florida. Crowds will decrease slightly after the holiday weekend.

6) President’s Day Weekend – This is a perfect storm, crowd-wise. Northerners are tired of “Old-man winter”, students are on winter break, and it’s a long holiday weekend. It’s brief, but crowds spike for about four days in mid-February.

5) Spring break – Spring break varies from state to state and school district to school district, but for the most part, extends from early March through Easter. Until Easter, spring break crowd levels will be on par with summer. Like any major holiday, crowds on Easter weekend can reach park capacity, especially at Magic Kingdom, resulting in temporary park closures. Weather during this time can vary from cool to downright hot! Pack accordingly.

4) Summer – Starting with Memorial Day weekend and continuing until mid-August, crowd levels are high. Think 8’s and 9’s out of 10. As pointed out earlier, almost everything is working at peak efficiency and park hours are extended. If you decide to go during the summer, be sure to book your hotel, dining reservations and Fastpass+ well ahead of time.

3) July 4th – This patriotic holiday is the peak of the summer season at Disney. Special fireworks events are held at the parks and crowds can quickly cause gridlock, even at Epcot, which is much more spread out than Magic Kingdom or Hollywood Studios. Still, the fireworks are breathtaking!

2) Thanksgiving – As in other times of the year, several things come together to create a large increase in crowd levels. Most U.S schools are now off the entire week of Thanksgiving, giving families a great opportunity to escape the cold weather back home for milder temps in central Florida. Plus, Christmas decorations are up around the entire Disney World resort, urging guests to get in the Holiday spirit.

1) Christmas/New Year – Officially the most crowded time of the year, the week between Christmas and New Year frequently sees the Magic Kingdom reach capacity, and at least temporarily close to new guests. Think 11 (out of 10) on the crowd level. Still, wouldn’t it be magnificent to experience Christmas morning in the Magic Kingdom?

BONUS TIP: To find the best possible time for your family to visit Disney World, you should consider planning and booking your next Disney trip with an Authorized Disney Vacation Planner you can totally trust like Mickey Travels. They’ll help you get the best price for your vacation, share expert advice and their services are totally FREE! It’s genius!