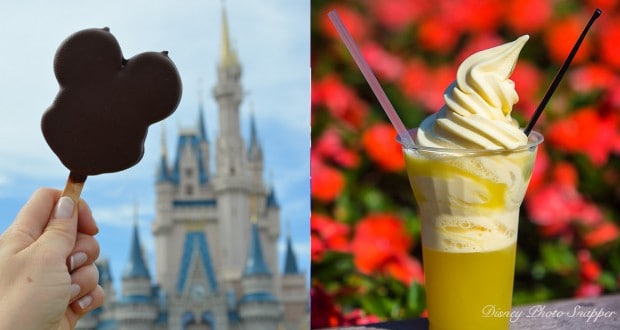 It’s a known fact that everything tastes better at Disney World. Why? Because you’re surrounded by the Disney magic! Seriously though, there are many tasty treats you just must try during your Disney vacation. After all, you’re going to need a lot of energy to walk around the theme parks! Here’s my Top 5 Disney treats you must try:

1. Dole Whip – The quintessential Disney World treat! If you like pineapple, make your way over to Aloha Isle in Adventureland at the Magic Kingdom. Made of pineapple soft serve ice cream, you can also enjoy it as a float. The Dole Whip is a great way to cool off on a hot summer day. Tip: Dole Whips can also be found at Captain Cook’s Snack Company at Disney’s Polynesian Resort.

3. Mickey-shaped Rice Krispie Treat – What is it about Mickey Mouse-shaped food that makes it so fun to eat? Eating the ears first, of course! Chocolate-covered or plain, you can find this yummy offering at the Confectionery on Main Street USA, Big Top Treats in Fantasyland, or in the food court at your Disney resort hotel.

4. Carrot Cake Cookie – Large and very rich, consider sharing this snack. It consists of two pieces of moist carrot cake with cream cheese icing sandwiched in between. Hop on over to the Writer’s Stop on Commissary Lane in Disney’s Hollywood Studios, where you can also enjoy a beverage, and browse the many book selections about Disney movies and television.

5. School Bread – This Norwegian treat is found in Kringla Bakeri og Kafe in Epcot’s World Showcase. It’s a sweet bun filled with vanilla creme custard and topped with glazed and toasted coconut. It smells delicious! Tip: Consider picking up one as you exit Epcot for a tasty breakfast the next morning.