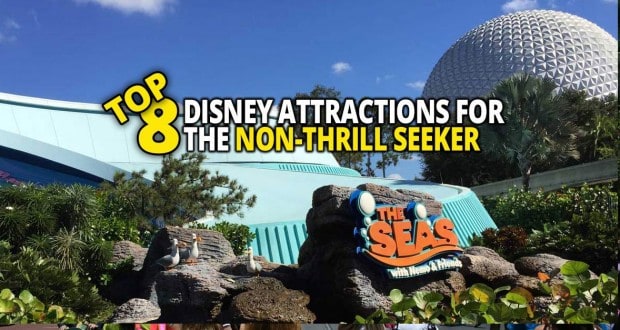 So you want to experience the Disney Magic but think you have to be in love with fast rides to do it? There is so much more fun to be had at Disney than screaming on a roller coaster. Here is a list of our top 8 Disney attractions for the non-thrill seeker.

8. Most of Fantasyland – Magic Kingdom-we have several family members who don’t want to feel the wind in their hair so we always spend some time in Fantasyland on Peter Pan’s Flight, Dumbo the Flying Elephant and Under the Sea-Journey of the Little Mermaid. These rides have all the Disney charm with none of the Disney speed.

7. The Sea with Nemo and Friends – Epcot- This is one of our favorite attractions at Epcot. The Nemo ride is a slow moving ride that follows Nemo on his adventures with a few peeks at a great aquarium. After the ride, you can spend time looking at the aquarium with real Nemo’s.

6. The Great Movie Ride – Hollywood Studios – If you love the classics, you will love this ride that takes you through some of the best Hollywood hits. You may even find yourself on a little Indiana Jones type adventure.

5. Buzz Lightyear’s Space Ranger Spin – Magic Kingdom- if you want an interactive experience that doesn’t move you too fast, take a spin on this ride. Help Buzz take down the Evil Emperor Zurg by shooting at targets and earning your galactic wings.

4. Kilimanjaro Safari- Animal Kingdom – This real animal Safari is like no zoo you have been to before. Take a ride on the back of a jeep and see some amazing animals from Africa as they roam free in a natural habitat. Hit this first thing in the morning for the most animal activity.

3. Pirates of the Caribbean/Haunted Mansion – Magic Kingdom- I put these two together because they are similar in speed and excitement. While they do move slow ( with one small drop on Pirates) they offer a fun ride experience that shouldn’t be missed.

2. Disney shows – I don’t think these should ever get overlooked by thrill seekers either. Disney has some of the best musical shows around and if you have time to kill while waiting for your family to ride a coaster, make sure to catch Festival of the Lion King and Finding Nemo in Animal Kingdom and Beauty and the Beast in Hollywood Studios. You’ll be screaming when it’s over, but it won’t be from fear, it will be from the amazing talent on stage.

1. Philharmagic – Magic Kingdom- personally I don’t think this ride gets enough attention from anyone. It is such a hidden gem that I encourage everyone to go see it two or three times. Have a seat and enjoy Donald’s 4D musical journey through some of the best Disney movies. It is a wonderful experience that will leave you signing too.

I know this doesn’t even scratch the surface of all the fun attractions for people who aren’t looking for a thrill, but hopefully it’s a start. There is so much fun at Disney for everyone, you won’t want to miss it!