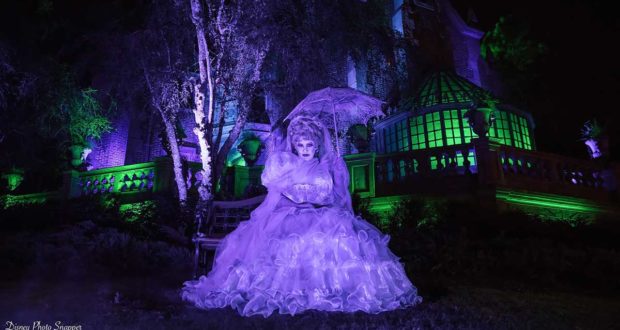 During the construction of Disney’s Haunted Mansion, it was said that Walt Disney traveled around the world inviting ghosts and spirits to come live at his new haunted attraction. Though this was just a publicity stunt, the number of different characters in the mansion is incredibly astounding. According to the lore of the mansion, there are 999 happy haunts residing in the halls of Gracey Manor. Each of them carefully and creatively designed by Walt’s team of Disney Imagineers. To list every one of the specters, spirits, and haunts in the famous attraction would be a feat of its own. But what better way to welcome Halloween than listing our 13 favorite phantasms of The Haunted Mansion. These are the ghosts and ghouls that make us all want to hurry back to our favorite spooky spot in the Magic Kingdom.

Our tour guide into the realms of the supernatural. The Ghost Host has been our favorite voice from regions beyond since the original attraction opened in 1969. Portrayed by famous voice actor and Disney Legend, Paul Frees, the Ghost Host’s somewhat sinister demeanor and creepy unseen presence make him the perfect ghost to introduce us to all the haunts the mansion has to offer. With Paul Frees’s haunting narration and some equally eerie writing from the Imagineers, The Ghost Host pushes the creep-factor up to eleven before the ride even begins.

A minor character to be sure, but an icon nonetheless. Anyone who’s seen promotional art or any home videos with Haunted Mansion scenes involved has seen this famous effect. As the Doom Buggy rolls onward, it passes a funeral display complete with burial wreath and casket. It seems however that the deceased party has not yet come to grips with his situation as a pair of skeleton hands try desperately to pry the lid off the coffin. This somewhat dark image is made comic by the nasally voiced protest of the corpse trying to escape. Familiar and iconic, even appearing as a Disney Pin, this casketed corpse is uber creepy and waiting to rattle some bones and tingle some spines.

One of the graveyard’s many residents, this phantom pharaoh can be seen chatting it up with a deaf member of the swinging wake. His sarcophagus has been hauled from an ancient mausoleum and cracked wide open so he can get in on the party. He seems to be more than happy to join in on the festivities, his grin showing heavily through the lower half of his bandaged face. He happily takes tea and conversation with his fellow tomb mates. The mummy has been featured on parks merchandise including the Disney Pins. He’s a goofy ghoul that fans can easily identify, much like the figures in our next two spots.

The only mortal character in the entire attraction, the Caretaker stands outside the entrance to the Haunted Mansion graveyard. Accompanied by his rather emaciated bloodhound, the Caretaker stands tall and trembling at his post. The Caretaker reluctantly tends to the Haunted Mansion graveyard and finds himself in the unfortunate position of walking in on the spirits and their swinging wake. It would appear he’s a bit too horror-struck to take in the party. But that’s ok. After all, someone’s gotta watch the gate.

The best thing about the haunted mansion is its mix of the haunting with the hilarious. When the Disney Imagineers first designed The Haunted Mansion, their intention was to blend the scary and the silly. Their goal is blatantly represented by the presence of these two figures. In the graveyard, a headless knight and his executioner can be seen singing along with the rest of the ghosts during the swinging wake. The knight still cradles his head under his arm but appears to have no hard feelings toward his decapitator. Likewise, the executioner still totes his ax on his shoulder, but seems more preoccupied with the party than honing his blade. This pair of friendly phantoms serves as the perfect mix of gruesome and glee.

There are many famous faces in the ballroom scene. The swinging wake has just begun and the party is already in full swing. All around, ghosts are eating, drinking, dancing, and carrying on as guests pass through the room. With all the amounts of supernatural activity, it’s easy to become distracted by all the fun. However, there are two feuding phantoms a bit too busy to attend the party. As the Doom Buggy passes over the scene, at the center of the back wall hangs a pair of paintings. In said paintings dwell a pair of duelists, squaring off for their showdown. If one focuses on these images, the spirits of the dead duelists will lean out of their paintings, turn, and fire their pistols at each other. A brief action, but a memorable addition to the scene. The Duelists mix in a little bit of dark humor to the otherwise jubilant scene, and that’s what makes them special. Too busy fighting to enjoy the party.

7. Phantoms of Another Opera

The singing busts and the Phantom Five are not the only musically inclined manifestations in the graveyard. Towards the mausoleums and the headless knight stand two opera ghosts crooning away to the music of the macabre. Dressed in the stereotypical viking and valkyrie attire, these ghosts have a love for all things operatic and show it by belting out some haunting arias. The next time you decide to take a Doom Buggy through the graveyard, have a listen to these haunting harmonies.

Of course, the biggest stars of The Haunted Mansion’s Ballroom scene are the dancing dead themselves. The ballroom dancers are the centerpiece of the entire sequence. Even in death, the colorful couples spin and sweep across the dance floor, looking as elegant as ever. The dancers are a mere warm-up for the festivities to follow in the Graveyard scene, but the amount of Imagineering genius gone into creating them is mystifying. Though they are created by a simple illusion, the ballroom dancers really put the boo in beautiful.

Constance Hatchaway, better known as The Black Widow Bride takes this spot on our list. Quite possibly the only purely sinister character in The Haunted Mansion, Constance has more than a bouquet to throw at the guests. Almost the entire attic sequence tells Constance’s murderous tale. As the guests float by on their way through the attic, portraits of Constance and her husbands dot the path. As they pass each portrait, each husband loses his head and Constance gains another string of pearls. According to the Haunted Mansion lore, Constance took the lives of seven husbands and inherited all their wealth upon their deaths, a hatchet being her weapon of choice. Now she haunts the manor seeking out new victims and to give them the ax. This murderous mistress is perhaps the darkest part of the ride, and that’s what makes her so memorable. Keep your heads about you when you see her next, she may just add them to her collection.

Whether it’s your first time riding or your twentieth, the one thing guests always remember from their time spent at the mansion is the theme song. Like “It’s a Small World After All” and “There’s a Great Big Beautiful Tomorrow,” “Grim Grinning Ghosts” is one of the most recognizable tunes on the Disney Parks playlist. This spooky song is brought to us from regions beyond by the singing busts of The Haunted Mansion graveyard. These spectral singers serenade spectators as their Doom Buggy floats among the tombstones. Easily one of the most memorable elements of the graveyard scenes, the singing busts set the mood for the swinging wake. Guests are sure to be tapping their tones to this tune fit for the tombs.

Serpents and spiders, tail of a rat, call in the spirits wherever they’re at… How can any ghostly encounter be complete without a proper seance? Madame Leota is The Haunted Mansion’s live in medium, communicator with the undead, and summoner of the spirits. Easily one of the most popular and most recognizable ghosts of the manor, Madame Leota floats in her crystal ball and causes the happy haunts to materialize for the guests, gorgeous and ghostly as ever. Her mere presence and performance are enough to make the seance scene a favorite for any Haunted Mansion visitor.

Remember kids, beware of hitchhiking strangers. In The Haunted Mansion, there’s almost nobody quite as strange as this ghostly trio. A traveler, a skeleton, and a prisoner, or as the fans know them: Phineas, Ezra, and Gus. Though the three are always grouped together, they still have their own personalities with their different attire and demeanor.We have Phineas with his large hat, carpet bag, and cheery disposition; Ezra in his dapper attire and sinister skeletal smile; and Gus with his wild beard and goofy grin making up for the presence of his ball and chain. All friendly phantoms waiting to catch a ride. These gruesome ghouls are waiting right outside the graveyard to hitch a ride on your Doom Buggy and follow you to the end of the attraction. They also have a few surprises in store for anyone brave enough to glance at their mirrors as the ride makes for the exit. Be a buddy to our friends on the other side and feel free to offer them a ride.

And our number one happy haunt is… The Hatbox Ghost. The Hatbox Ghost holds the number one title because of the massive cult following he accumulated during his departure from the mansion. Despite being one of the first ghosts to inhabit the attraction, The Hatbox Ghost is only recently making a comeback. However, he’s appeared on merchandise, tee shirts, posters, and artwork for years. And unlike some of his more popular fiendish friends, The Hatbox Ghost’s backstory is almost a complete mystery. But in a twisted way, that’s what makes him so interesting. This dark stranger with the vanishing head has made his way back into the mansion and into the hearts of its fans. He now has a permanent home stalking the attic of Disneyland’s version of the ride, now with an updated look and an improvement on his illusions, causing many fans to lose their heads over him. 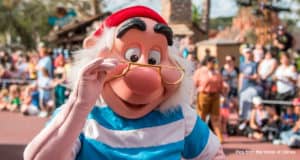 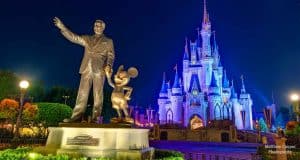 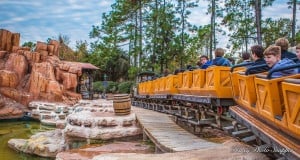