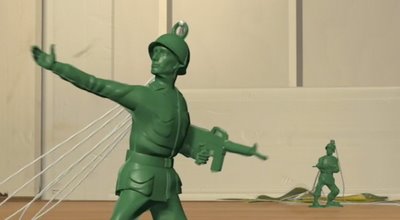 Sarge and his green army corps are a familiar feature of the Toy Story franchise. They can be seen in all the films, merchandise, and even appear in the parks as meetable characters. They are often remembered for the distinct way they hop/march to get about. This movement effect was created by Pixar artists attaching wooden planks to their shoes and hopping around the animation studio to inspire this distinct character movement. Recordings of this technique can be found on YouTube and on the film’s special features. It may be silly to some, but you cannot deny the creativity behind this method of artistry.