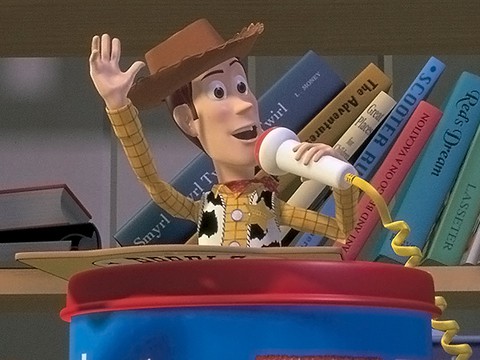 Until the debut of Toy Story, Pixar had won several awards for their short films. Shorts like Luxo Jr., and The Adventures of Andre and Wally B. were the prototypes for future Pixar features, so they are obviously worthy of a Disney Easter-Egg. In the scene where Woody calls a staff-meeting in Andy’s bedroom, a shelf full of books can be seen behind him. A closer examination of the books reveals their titles to be those of previous Pixar shorts. The titles include: Tin Toy, Red’s Dream, Knick Knack, and The Adventures of Andre and Wally B.. It should also be noted that John Lasseter, Disney Animation legend and head of Pixar, is also featured as the author of the Tin Toy storybook.