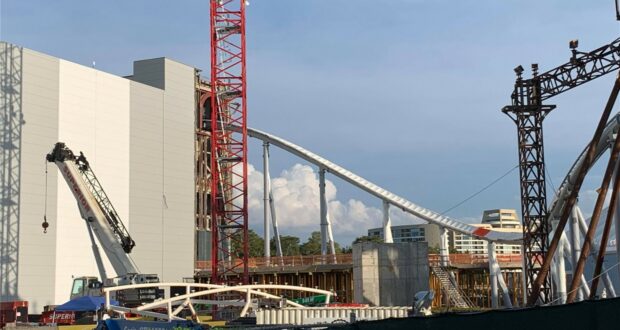 Walt Disney World’s new Tron coaster, Tron Lightcylce Power Run, has been a fun one to follow along with as construction moves forward. We recently shared several aerial photos for an overview of the construction. Today, we’re sharing photos from inside the park! Here’s the latest as of October 16 as seen in Magic Kingdom!

Here are seven photos of what you’ll see as you stroll through Tomorrowland and the back part of Fantasyland as construction progresses forward.

It’s coming along! It may not look like much right now, but Disney’s art rendering is stunning as shared here:

Disney’s initial deadline was to have the coaster ready to ride in 2021 – in time to celebrate Disney’s 50th Anniversary. With the pandemic hitting, construction halted back in March but the construction resumed shortly after. Disney has not announced if there will be a delay to the opening. What we do know is it’s fun to watch the progress of the coaster as it unfolds! Want a sneak peek of what this attraction will look like? Here’s a ride through of the attraction in Shanghai Disneyland. Hold on tight!