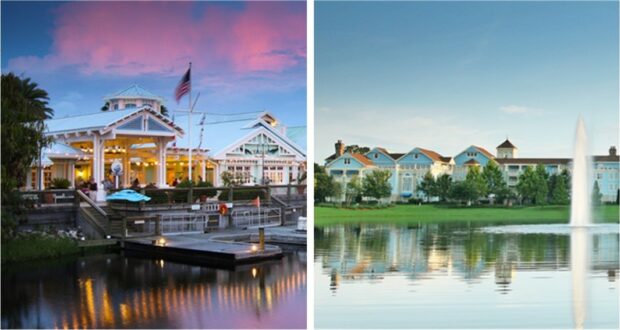 Two of Disney’s popular Disney Vacation Club Resorts are scheduled to undergo refurbishment in the near future. Both Disney’s Old Key West Resort and Disney’s Saratoga Springs Resort will have their lobbies and front desks refurbished.

As reported by DVCNews: “Work at Saratoga Springs will begin with a closure of the connecting lounge that runs between the front desk and Artist’s Palette. On July 12, the porte cochere is slated to close.”

Flying into Saratoga at this time? The great news is Disney’s airport transportation, the Disney’s Magic Express, will continue to run from the normal pick up and drop off location. There will however be a temporarily walkway for guests to reach the front desk. If you’re driving, you will be offered a chance to do curbside check-in at the Disney Vacation Club Preview Center. Thankfully, check-in is also now made super easy right from your phone with the My Disney Experience App. As the Carriage House begins refurbishment in August, front desk and concierge will be relocated to the hallway lounge.

It looks like much of the same work can be expected for the neighboring Disney’s Old Key West Resort. DVCNews shares: “Once the den modifications are complete, it will temporarily house Cast Members as the front desk is refurbished.”

Both Disney’s Old Key West and Disney’s Saratoga Springs will begin the updates on the lobbies beginning June 28, 2021. Disney has yet to release a timeline for completion.