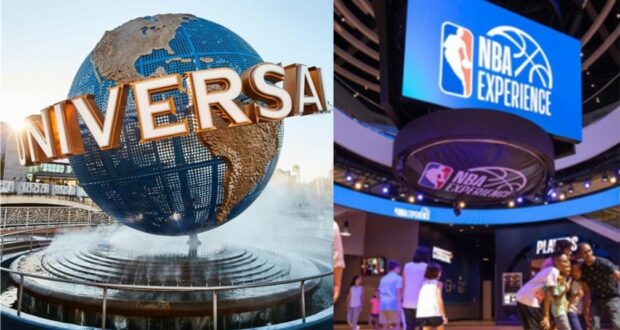 Sorry to all the National Basketball Association (NBA) fans out there! We shared yesterday the big news that The NBA Experience will not be reopening its doors and instead will be closing permanently. Unfortunately, the basketball experience that was located on the West Side portion of Disney Springs is primarily high-touch and interactive gaming. With COVID precautions, it would be tricky to reopen such an experience. The grand opening for The NBA Experience was held on August 12, 2019, but never really seemed very popular outside of its initial opening. Basically, if you weren’t a huge basketball fan, there seemed to be very little interest. The NBA Experience closed in March 2020 due to COVID along with much of Disney. Ultimately, the experience was in operation for less than one year. Ouch! Well, now Universal Orlando Resort and others are taking to Twitter to make fun of the Disney closure.

In all honesty, whoever runs Universal Orlando Resort’s Twitter account is known to have a great sense of humor. It does however make us roll our eyes that they must comment on almost every Disney decision or incident. We can remember when they recently tweeted out about the lady that jumped off Living with the Land at EPCOT for a cucumber. And now, they tweeted: “aiiiiiiiiiiiir ball Basketball”.

Even Oviedo Mall (yes, a MALL!) joined in on making fun of Disney on Twitter by tweeting, “Look at us, outlasting the NBA Experience.” This random mall is located about 40 minutes from Walt Disney World. But get this, this tweet was trending which means Oviedo’s Twitter following grew! And yes, they weren’t lying – as Oviedo Mall opened in 1998 and is still open.

While there is much speculation and hopes of what the NBA Experience will become, @hauntscene took to Twitter to share one hilarious idea… a Spirit Halloween store which seems to take over many closed stores around the globe this time of the year!

While we too weren’t sure how well The NBA Experience would do when it replaced DisneyQuest, we were hopeful for all those involved in the development of the project that it would go well. Unfortunately, some things just don’t last! What do you think should become of the former DisneyQuest and NBA Experience building?