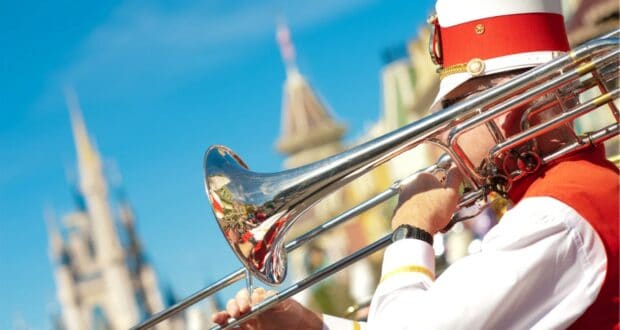 As Walt Disney World gears up for their 50th Anniversary celebration, we can’t help but get sentimental about the huge milestone! While the 18-month long celebration kicking off on October 1, 2021 will undoubtedly be an unforgettable experience, it’s necessary to look back at the past to remember how Disney got to where they are today… with exceptional Cast Members! Disney shares a video below about a 1971 opening day parade performer returning to Walt Disney World.

As shared by Disney: “On Oct. 25, 1971, a 1,076-member marching band paraded down Main Street U.S.A in celebration of Walt Disney World Resort’s grand opening. With trombone in hand, Dave Phillips was among the marching musicians, stepping to the beat of “76 Trombones.” Nearly 50 years later, Dave returned to Magic Kingdom Park during the holiday season to walk down Main Street U.S.A once more, this time with his 5-year-old grandson, Gideon.”

We’re so thankful that after 50 years, we can still enjoy the beat of the marching band, currently called Main Street Philharmonic, march down Main Street, U.S.A at Magic Kingdom. The past, the present, and the future… we’re ready to celebrate Walt Disney World’s 50th Anniversary!