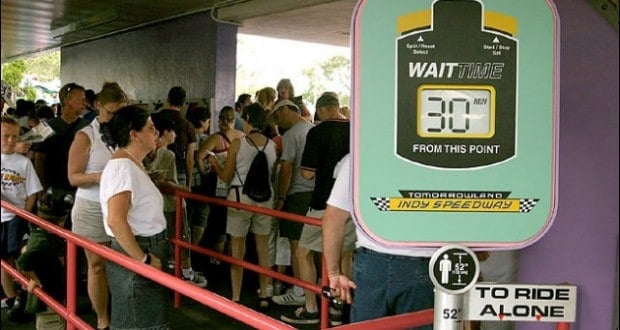 How NOT To Wait In Lines On Your Disney Vacation: 7 Time Saving Tips

I despise waiting on lines. The real world is full of lines. Lines to check out at the grocery store. Lines at the coffee shop in the morning. Lines for the ladies room. So, when I go on vacation to the most magical place on Earth, I don’t want to wait in lines. Waiting on lines is decidedly “un-magical”. Thus, I have devised a strategy that has allowed me to tour the Disney parks even at the busiest times of the year with minimal waiting. Here are some tips guaranteed to help minimize waiting time and maximize your fun.

At exactly 180 days prior to your check-in date, book your “ADRs” (advanced dining reservations). Whenever possible, reserve dining during “off peak” times (try eating lunch around 11:00 or dinner between 4:00 and 5:30). Even with ADRs, there can sometimes be a 20-30 minute wait at peak dining hours. Having reservations at an off time will make the probability of a wait less likely. It also means that while the majority of people are eating, you’ll be available to experience attractions with less waiting. The rule for time saving dining at counter-service restaurants (no reservations) is the same. Try to eat when others are not.

DO book as many character dining experiences as your budget will allow to satisfy the particular character viewing wishes of your family. By combining character visits with dining, you will save yourself many hours of waiting during park touring.

Prior to 60 days before check-in, make a basic itinerary of your vacation. This itinerary should include which parks you plan to visit on which days of your trip taking into account the dining reservations you’ve already made. Then make a list of “must do” attractions, experiences, and meet and greets for each member of your party. As a general rule, it is advisable to avoid the Magic Kingdom on weekends and Mondays. Most visitors to Disney arrive on the weekends and make the Magic Kingdom their first stop.

At EXACTLY 60 days prior to your check-in day, book Fastpass+ reservations. This will only be possible if you have valid park tickets linked to your “My Disney Experience” account. Fastpass+ allows you to reserve a time slot for three attractions in a single park for each day of your vacation. You simply arrive at the attraction during the assigned window of time and walk on to the attraction with little or no wait.

I recommend making Fastpass+ reservations for the afternoons and evenings. Why? Wait times for attractions will only get longer as day goes by. If you arrive at the parks early each morning, you will be able to get on several attractions without a wait (see Tip 7). Then later in the day, when the wait times are longer, you will have Fastpasses to use! Keep in mind that you can also Fastpass certain character meet and greets, as well as parades and fireworks displays. If you are diligent about arriving in the parks when they open and can experience many of your “must do” attractions first thing, you can save Fastpasses for these alternate activities. (See recommendations for attractions below)

Get to the parks BEFORE they open. If you are staying anywhere on Disney property, it will be possible for you to board a Monorail, boat or bus that will get you to the main gate of any park at least 30 minutes prior to “rope drop” (that’s Disney lingo for opening time). This is critical to the success of this strategy. You will be able to get through security checks quickly at this this time of the day, and be waiting to walk into the parks the moment you are allowed to do so.

AND MOST IMPORTANTLY – Tip 7:

Use your first hour wisely. This is prime Disney touring time! Make a beeline for the “must do” attractions that you don’t have Fastpasses for later in the day. DO NOT stop to take a photo in front of the castle, grab snacks, coffee, etc. With little to no waiting time at this point of the day, you should be able to experience between 3 and 6 attractions in the first 60-75 minutes in the park.

Your choices for “first hour” rides should include attractions that are high-demand and relatively short in duration (see recommendations below). For example, during the first hour you would be able to ride Soarin’, Mission: SPACE, and Test Track(all very popular rides with typically long wait times later in the day) in the same amount of time that it would take you to experience Ellen’s Energy Adventure (not a highly-demanded attraction and one that takes 45 minutes).

Not certain which attractions to do at which times of the day? Check out my recommendations below.

The following attractions are my top choices for “first hour” Disney touring. All are short in duration (7 minutes or less) and highly demanded:

Hollywood Studios: Rock ‘N’ Roller Coaster, Tower of Terror, Star Tours (Nearly everyone who gets to this park with young children at rope drop runs to Toy Story Mania. This is an 8 minute ride. If you want to ride the others mentioned here, use a Fastpass for Toy Story later in the day. If you don’t have any interest in the other three, head to Toy Story at rope drop AND get a Fastpass for later. It’s worth riding twice!)

Animal Kingdom: Expedition Everest, Dinosaur, Kali River Rapids, Primeval Whirl (Most visitors will head toward the Kilimanjaro Safari. My advice here is the same as for Hollywood Studios. The Safari ride takes 18 minutes. Only do this in the first hour if you don’t have interest in the three others. Otherwise, Fastpass it for later in the day.)

Epcot: Soarin'(if not getting a Fastpass), Living with the Land (13 minute ride, but in the same pavilion as Soarin’), Test Track, Sum of all Thrills (in Innoventions East), The Seas with Nemo and Friends

The following rides/experiences are my top choices for afternoon Fastpasses. They are longer rides or experiences that are in high demand:

Magic Kingdom: Meet Anna and Elsa at Princess Fairytale Hall (this is THE ONLY PLACE in Disney to meet these princesses and the standby lines have exceeded 4 hours. If you have a little princess in your party, this Fastpass is a MUST), Space Mountain, Enchanted Tales with Belle, Splash Mountain, Haunted Mansion, Jungle Cruise, Meet Tinkerbell at Town Square, Buzz Lightyear’s Space Ranger Spin.

The following is a list of attractions in each park that rarely have a wait, generally have very minimal wait times (10 minutes or less), or is a live performance requiring 15-20 minute pre-show arrival. You can use these attractions to fill in the time between your first hour and your Fastpasses. There are also parades to watch, street performances, and characters to meet!

Hollywood Studios: Muppet*Vision 3D, Beauty and the Beast, Voyage of the Little Mermaid