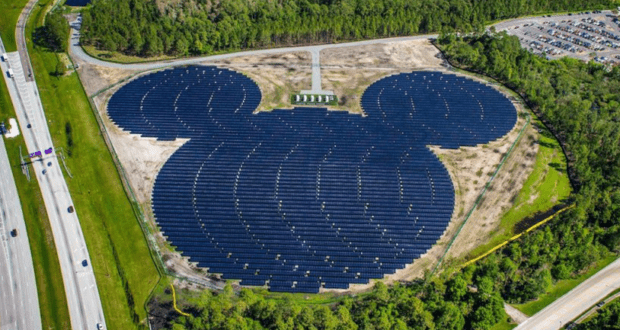 Happy Earth Month Disney fans! Disney has been celebrating all April, and has made a new announcement regarding more solar power on the way to Walt Disney World. With two new solar facilities coming to the property, Disney plans to power 40% of their annual energy consumption!

As announced by Disney: “Walt Disney World has been basking in the glow of the Sunshine State and using solar energy for several years, and today, Walt Disney World and Reedy Creek Improvement District (RCID) are teaming up with local utility partners in Central Florida to develop two new 75MW solar facilities, which are expected to come online in approximately two years. These new solar projects add to a not-so-hidden Mickey shaped solar array, built in collaboration with RCID and Duke Energy, sharing that authentic Disney flair across 22 acres of land, as well as the massive 270-acre, 57MW solar facility built in partnership with RCID and Origis Energy USA. When combined, Walt Disney World’s total solar facilities will produce enough renewable energy to power up to 40% of its total annual energy consumption.”

That’s seriously impressive! But, of course there’s more! Disneyland Paris, Disneyland in California, Hong Kong Disneyland, Tokyo Disney, and even Disney Cruise Line’s Castaway Cay are using solar power to better the environment. Check out all the details as shared by Disney here. Plus, check out the video below.

Way to go Disney! Keep up the amazing work!