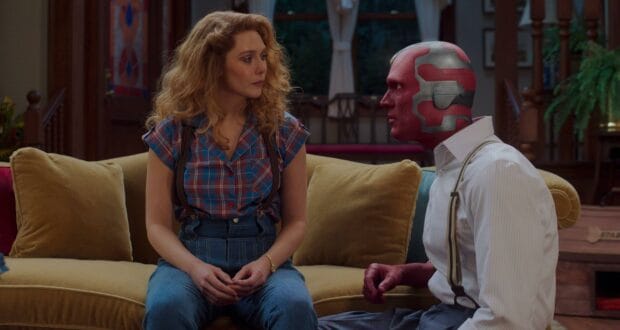 What Future Star Wars Shows Could Learn From Marvel’s “WandaVision”

Marvel’s WandaVision has now come to an end on Disney+, but what a show! It expanded the universe beyond that cinematic one with a unique concept and compelling narrative, all the while striking an impressive balance between its hilarious parody of the traditional American sitcom with more familiar MCU territory. But fear not – there’s more in the way of MCU shows on the horizon, and there’s a whole bunch of live action Star Wars ones coming up too, following the huge success of The Mandalorian. There’s Ahsoka, Andor, Rangers of the New Republic, Obi-Wan Kenobi and The Book of Boba Fett. But what can Star Wars television learn from WandaVision?

Since 2014’s comical cosmic romp Guardians of the Galaxy, the MCU has experimented with genres more, especially comedy. Just look at how Thor: Ragnarok swiftly departs the somewhat self-seriousness of its predecessors in exchange for a more upbeat chuckle-fest, without creating any jarring effect in doing so and leaving us wholly believing that it still exists inside the MCU. But the ‘genre-busting’ WandaVision is an even better example.

We’re not suggesting that The Book of Boba Fett adopts canned laughter (even if Jabba’s Palace would provide the perfect stage for a sitcom), but a Star Wars show that leans more towards comedy would be so much fun. It’s not all about the laughs, though – why not a tragic love story (“I Love You, I Know” has a nice ring to it), or perhaps a noir-ish murder mystery set in Coruscant’s gritty underworld. “Din City”, anyone?

Though Wanda and Vision could hardly be previously described as ‘uninteresting’, they were still underused in the movies, despite being two of the most powerful Avengers. It’s to no surprise, of course, considering pop culture-juggernauts like Iron Man, Thor and Captain America led the battles in Age of Ultron, Infinity War and Endgame. Fortunately, WandaVision has successfully – and quite literally – given the couple a shot at the center stage.

There are many characters in Star Wars who not only deserve a shot at redemption, but wield the potential be utilized for future TV projects (The Clone Wars does an excellent job of bettering certain characters from the prequel trilogy). And while none of the upcoming shows appear to be set near the timeline of the sequel trilogy, rumor has it that The Mandalorian will slowly edge or ‘time-jump’ towards The Force Awakens, so maybe a youngling-Rey is on the horizon.

Would you love to see a black-and-white Star Wars show? Who wouldn’t! It would undoubtedly have to compliment the concept, of course, not unlike WandaVision’s pilot episode, which was heavily inspired by The Dick Van Dyke Show. In fact, it was sad to see the show suddenly available in color! This is just an example, of course, and it’s rare that any dramatic new style could work, so it would have to be both earned and justified – especially in a Star Wars show.

With desert-set movies like Logan and Mad Max available in black and white, and with Star Wars already carrying that rusty, dusty, sand-swept and Wild West feel a lot of the time, why not a one-off black and white episode? The Mandalorian and The Book of Boba Fett could make this work, seeing as they both revolve around bounty hunters. Think flashback-episode, or maybe a planet that simply sucks the color out of everything!

The prequel trilogy and animated show The Clone Wars are the most visually striking entries in Star Wars. Sure, the franchise is filled with stunning visuals, but more often than not – in the case of the other two trilogies, at least – its settings are typically market town, desert, snow or industrial in nature. While we did mention that we’d love to see some black and white, we also think there’s room for more visual ambition in that faraway galaxy.

A feast for the eyes doesn’t need to be dripping with color, but one of Star Wars’ problems is that it sometimes falls short of stunning scenery, despite the plethora of worlds at its disposal. For a start, spending more time in the Coruscant’s somewhat-retro-stylized underworld could evoke memories of the ‘80s, a popular trend in television that even WandaVision adopts as it traverses the many decades charted by the ever-evolving American sitcom.

1. Think Outside the Box

We love shows like The Mandalorian and The Clone Wars. The former is easily the grittiest and ‘coolest’ Star Wars entry, while the latter offers up a huge variety of different storylines. However, Star Wars does tend to follow a ‘safe’ storytelling format. But then so do the MCU movies – it’s WandaVision that truly breaks that mould (even if the finale does feel like very generic MCU). But what works for that show wouldn’t necessarily work for Star Wars.

It goes without saying that seeing Han and Leia suddenly living in a suburban settlement with Jar Jar trimming the hedges next door would make no sense, but the franchise does possess other tools. There are the more metaphysical elements, like the meditative mental arena of the Jedi, or those supernatural planets we saw in The Clone Wars that are particularly strong with the Force, for starters, which would allow for more creativity and unconventional storytelling.

We’re excited to see what the future Star Wars TV projects will bring, even if they do wind up being a little more on the formulaic side – which still worked incredibly well for The Mandalorian. But never say never. After all, could you have ever imagined a sitcom-of-sorts starring Wanda and Vision that’s more Bewitched than Scarlet Witch? Exactly!