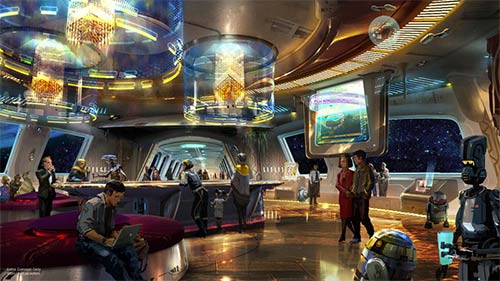 It’s not a ride, but the Star Wars Hotel that will join Star Wars: Galaxy’s Edge is being built in the style of a starship, so it’s fair to say that it’s going to be an attraction in its own right. While an opening date and an official name are yet to be confirmed, you can expect the most experiential hotel in the galaxy. And as it will connect guests directly to Batuu, it won’t be too “far, far away”, either!

You’ll be thrust into your own “unique journey” on arrival and become a part of the galaxy. Details on the “story” element are slim, however, it has been confirmed that you’ll be able to dress up in galactic attire and interact with your environment. Concept art also showcases stylish bunkrooms and a lobby area and control deck alive with all sorts of characters, and each offering startling views of space.

These signature attractions barely scratch the surface of Batuu. You can also expect marketplaces bustling with humans, droids and creatures from all corners of the galaxy (one merchant stall will even be run by a creature!). In the meantime, you can catch glimpses of Star Wars: Galaxy’s Edge at Echo Lake’s Star Tours – The Adventures Continue, as well as an exclusive preview at the Animation Courtyard’s Walt Disney Presents.

Left 4 of 4 right
Next: Universal and Disney - How to Divide Your Time Between These Fabulous Parks