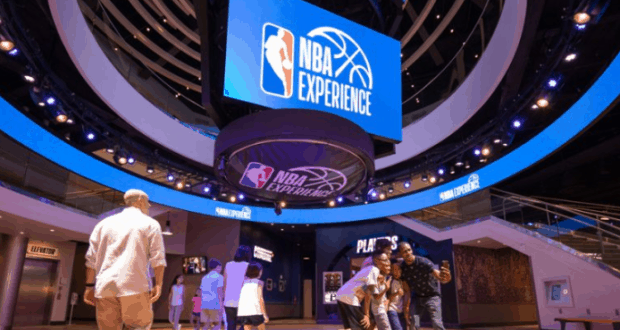 Following the recent news that the 2019-2020 NBA season could be making its long-awaited comeback at none other than Walt Disney World Resort on July 31, there’s no better time to talk about the NBA Experience at Disney Springs. The all-new sports entertainment venue made its ‘slam dunk’ debut last summer, but if you’re yet to hit the court, let’s take a look at what you’re going to love about the NBA Experience when it eventually reopens.

5. The Look and Feel

Upon entering the venue, you’ll first pass through the Player Entry Tunnel where you’ll be greeted with the thunderous applause and roar of a crowd. After being made to feel like a true champion before even breaking a sweat, your NBA ‘career’ will begin. Yes, it’s time to put the likes of LeBron James, Kawhi Leonard and Kyle Lowry to shame!

The venue’s style is inspired by 13 real-world NBA arenas. Even from outside you’ll feel like you’re waiting to watch an actual game. With the architecture, aesthetics and atmosphere combined, you’ll be immersed into the electrifying world of NBA, but not without some of that good old fashioned Disney magic, which helps make the NBA Experience a unique one in its own right.

It wouldn’t be an authentic NBA experience without its very own court. So slip on your Air Jordans and warm up ready for some NBA-inspired action. The Hardcourt offers 13 unique games and activities – they include Dunk!, Shoot!, Combine, Dribble and Slingshot! (yes, you get to slingshot basketballs – where else?).

No matter your skill level, though, you’ll enjoy the thrills of a real arena, with virtual crowds, honest competition and even coaching tutorials. There’s plenty going on at the Hardcourt, so you could say there’s a lot of ‘space’ to jam’ here. Yes, yes, we know that movie isn’t Disney, but never say never. After all, did you ever expect Disney World to be considered to host the NBA?

Whether it’s before or after the NBA Experience, be sure to visit West Side’s very own NBA Store. Pick up official NBA Experience-themed fashion and sportswear, including apparel, accessories, collectibles and more, all of which celebrate teams from across both the NBA and the WNBA. As with any other store throughout the resort, you won’t know where to start!

This awesome emporium is also not without a splash of Disney magic, so expect to see gear adorned with Disney characters, too (the Mickey/basketball hybrid logo is particularly adorable). Before leaving, check out the D Tech on Demand station where you can customize accessories like MagicBands and phone cases, adding that trendy NBA Experience touch.

If the more physical games and activities seem a little ‘out of your league’, then why not get your head in the arcade game first. The Arcade Area offers classic basketball arcade games as well as highly-immersive digital arenas. You’ll feel like a champion here as much as you will elsewhere at the venue. And just because it’s the Arcade Area, your skills will still be called upon.

Battle the clock with your best shots, compete against both stationary and moving hoops, and enjoy the latest in official NBA gaming and more. The Arcade Area impressively boasts a retro atmosphere while also celebrating modern gaming. In fact, you might wish to check the Arcade Area out first because there’s no better place to practise shooting hoops before hitting the Hardcourt!

1. The Trivia, History and Behind-the-Scenes Experience

After a day on the court, you’ll be itching to test your knowledge with some trivia and history (largely because you’ll want a break from all that physical action). Learn about the science of the sport as well as NBA’s long history, its great legends and beyond. There are even two theaters that offer truly immersive storytelling experiences.

You can also step into the sneakers of a player as you go behind the scenes and hit the locker rooms, and prepare for a photo opportunity at the Hall of Champions, where you’ll see classic footage of NBA over the decades. Get a real taste of what it’s like to walk in the footsteps of the greats, like Michael Jordan, Shaquille O’Neal and the late Kobe Bryant.

If you plan on visiting Disney Springs, check out their official website to familiarize yourself with the health and safety measures in place. The NBA Experience is yet to reopen, but at least it’s not long until NBA is back on the court (and hopefully at Walt Disney World Resort)! So whether you’re a fan of current champions the Toronto Raptors or Florida’s very own Orlando Magic, let the games satisfy your inner-player until your very own NBA Experience ‘highlights’.