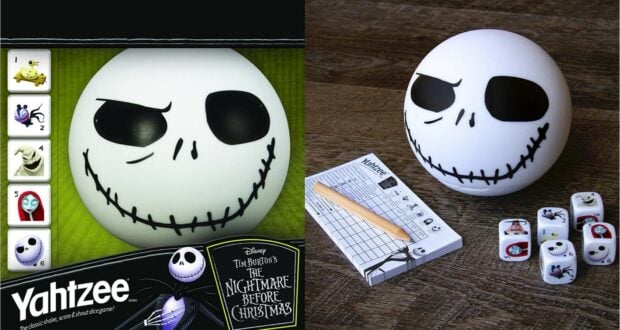 The happy haunts have materialized and Halloween is in full swing at Disney’s Parks! From Disney After Hours Boo Bash at Walt Disney World to Oogie Boogie Bash at Disneyland Resort, all things spooktacular are well underway. Disney has released loads of Halloween merchandise and Magic Kingdom Park is decorated with orange Mickey pumpkins and more. Disney has even dished out frightfully fun Halloween treats for the season. Whether you’re planning a visit to the Disney Parks this Halloween season or staying at home, there is a perfect way to enjoy a little family time playing a game. The popular Nightmare Before Christmas film has inspired a new Yahtzee game where yes, you roll none other than the Pumpkin King’s head!

Tim Burton’s The Nightmare Before Christmas Yahtzee is currently available via shopDisney for $19.95 plus shipping. Or you can also purchase the game from Amazon for $19.98 with free shipping for Prime Members. Game details include: “Enjoy a frightfully fun time playing this special Tim Burton’s The Nightmare Before Christmas edition of Yahtzee. Ready for you to shake up this version of the classic dice game are the inhabitants of Halloween Town, including Jack Skellington. Magic in the details: Includes a custom Jack Skellington dice cup, custom score pad, pencil, and custom dice with movie icons: #1 Zombie Duck, #2 Evil Teddy, #3 The Mayor, #4 Oogie Boogie, #5 Sally, #6 Jack Skellington.”

Are you ready to try your luck at rolling Jack Skellington’s head for a family game night? While you spend time with the family this Halloween season, don’t forget to stream Halloween favorites on Disney+ to get in the spirit! Disney has announced, “Muppets Haunted Mansion” is coming to Disney+ as a Halloween special this fall. You can also check out our list of best Disney movies to watch for Halloween. Get ready to yell YAHTZEE Nightmare Before Christmas fans!