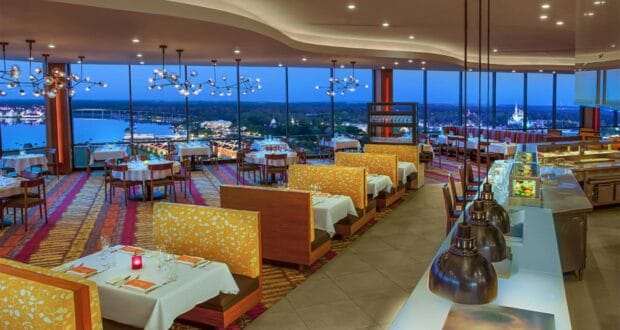 We previously shared the news that The Wave… of American Flavors at Disney’s Contemporary Resort is scheduled for refurbishment this July. While Disney has yet to release in depth details about the refurbishment, we do know they are working on the space “in time for the 50th anniversary”. With Disney’s Contemporary Resort rooms being re-imagined to an Incredibles theme, rumors are swirling around whether that theme will carry through to the remodeled Wave restaurant. Now, Disney has announced The Wave breakfast is moving to one of Disney’s most popular signature dining locations!

As noted on the Walt Disney World website: “Starting July 16, The Wave… of American Flavors will be closed, as we refurbish this space in time for the 50th anniversary celebration of Walt Disney World Resort. Dining is still available here through July 15. And, for a limited time during this closure, you’ll be able to enjoy the breakfast menu served at California Grill.”

Breakfast is currently available at The Wave from 7:30am to 11:00am through July 15. You’ll then notice on the website that lunch and dinner times are removed from the calendar beginning July 16. There are still however breakfast times listed each day from 7:30am to 11:00am through September 6 which will be held upstairs at Disney’s California Grill.

If you’ve never had a chance to dine at California Grill, this could be an opportunity to enjoy the stunning views and dining room offered at this prestigious rooftop restaurant for The Wave breakfast prices! If Disney keeps the current Wave breakfast menu, you can expect to spend between $12 and $20 for an adult entrée. Sounds like breakfast plans are in the works for us! Keep a watch on the breakfast menu prices as July 16 approaches.