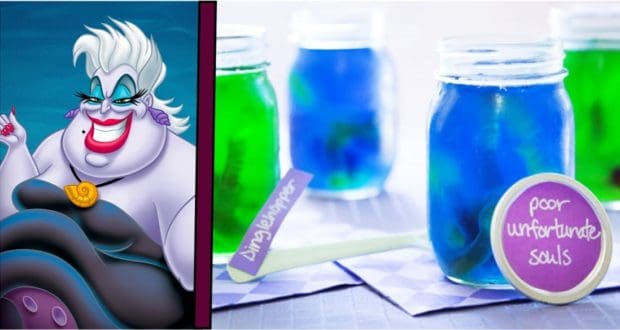 These poor unfortunate souls had no chance against Ursula! You may remember from The Little Mermaid, this evil sea witch is up to no good as she displays several jars of “poor unfortunate souls” that couldn’t pay the price of Ursula’s evil tricks. Family.Disney.com has a recipe that will allow you to create your own field of souls… this time with yummy sweets treats to go along with it! Plus, no spell casting required.

1. Wash, rinse and dry a small Mason jar. Tip: Straight-sided, wide-mouthed jelly jars work best, because they’re the easiest to fill and the easiest for the kids to empty.

2. Open boxes of green or blue gelatin dessert powder – or a mixture of both – and shake them into a heatproof mixing bowl or large measuring cup. A standard-size package of gelatin makes 2 cups of wobbly dessert, enough to fill two 1-cup jars or four ½-cup jars, so determine how many jars you’ll need ahead of time and purchase as many boxes as you need.

3. Pour 1 cup of boiling water for every box of gelatin into the bowl and stir it until the powder dissolves completely. Add an equal quantity of cold water and stir again. If you’re in a hurry, use 2 cups of ice in place of each cup of cold water. When the gel begins to thicken, after 5 or 6 minutes, remove any unmelted ice.

4. Fill each jar about 2/3 full with the gelatin and place it in a rectangular cake pan or other baking pan. When the jars are all filled, the pan makes it easier to transfer them to your fridge. You’ll have gelatin left over, at this stage. Set it aside in a warm place, because you need it later.

5. Refrigerate the jars of gelatin for roughly 20 minutes, until the dessert begins to set but is still quite soft. If you used the ice-cube technique, cut that time in half.

6. Cut the gummy worms into varying lengths with a knife or clean scissors while the gelatin begins to set. This is optional, but gives the worms – for lack of a better term – a more “lifelike” appearance. The movie’s poor unfortunate souls moved around and reacted to Ursula’s threatening song, and the gummies look more real at varying heights in the jar.

7. Remove the pan of Mason jars from your refrigerator, and slide several gummy “souls” into each jar. The gelatin should be thick enough to hold them upright, but not set enough to make it difficult for you to slide them in.

8. Soften your leftover gelatin by melting it in your microwave or over a pot of boiling water. Divide it evenly between the jars to make a smooth, even surface and conceal any fingermarks.

9. Return the jars to your refrigerator until they set completely. Keep them cold until party time.

10. Let guests know just what kind of treat this is with a custom label for each Mason lid. Trace the tops of your lids on purple or blue construction paper and write “Poor Unfortunate Souls” on each circle with a marker or silver paint pen. Cut out the labels and tape one to the top of each lid.

11. Offer each guest their very own themed utensil to gobble up those yummy ‘souls.’ Cut out a simple tag made of construction or Kraft paper, with the words ‘Dinglehopper’ written in silver paint pen, and tape it to a spork or fork. Make sure you make enough for every jar. Write the name of each guest on the back of the label so it becomes a favor at the end of the party.