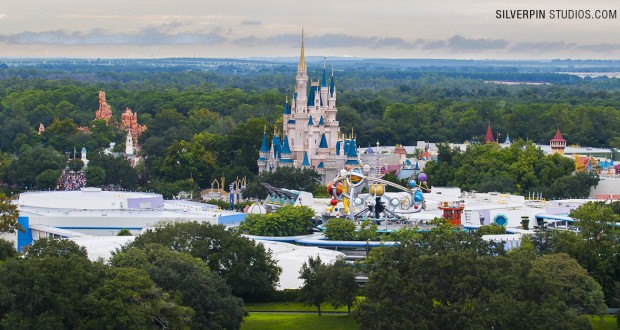 Facts, figures, history… there’s so much to be learned about Disney’s global network of theme parks. While there’s no particular rhyme or reason to the combination of facts on this list, I hope you find them as interesting as I do!

9. The most visitors: Magic Kingdom

Not surprisingly, the Magic Kingdom receives the most visitors yearly of all theme parks worldwide. Tokyo Disneyland comes in second, followed by Disneyland in California, and Tokyo Disney Sea. Epcot rounds out the top 5.

Walt Disney purchased the land used for Walt Disney World for $5 million, or about $185 an acre. Had he not snatched up the land under the guise of several dummy companies, he surely wouldn’t have gotten such a bargain! Less than half of the land has been developed thus far. I can only imagine what’s in store for that unused space!

7. Rides, by the numbers

Disney’s Hollywood Studios has 11 attractions, and only 5 rides. You read correctly: 5! Before it was a theme park, it was designed to be a working studio, so let’s cut them a break. There’s plenty of entertainment and other attractions, but it still seems shocking that the park only has 5 rides. That being said, the rides in the park are extremely popular. Toy Story Midway Mania has some of the longest lines of any park, and the Rock ‘N’ Rollercoaster and Tower of Terror provide some of the greatest thrills you’ll find at Disney parks. Incidentally, Epcot only has 9 rides, and Animal Kingdom has 7. When you think about it, that’s really not a lot when you consider how big Walt Disney World is. Disneyland and Disney California Adventure, however, have a combined 57 rides in two parks (plus many more “attractions”).

Walt Disney World is the largest single-site employer in the United States, with more than 60,000 cast members on its payroll.

The Tree of Life at Animal Kingdom has over 100,000 leaves. All of these leaves will soon be replaced with ones that light up as the park prepares for its new nighttime entertainment!

Speaking of Animal Kingdom, have you ever noticed that the drinking straws there are made of a papery material? They’re actually made this way so that if an animal got hold of one, he would be able to eat and digest it without incident.

Disney has an on-site tree farm, where hundreds of “stand-in” trees are prepared to make their debut should anything happen to their counterparts. So, if a mature tree is somehow damaged in the park, there’s a back-up waiting to replace it the next day. If you’d like to check out the tree farm, consider taking the 7-hour Backstage Magic behind the scenes tour.

Disney plans to open yet another resort, this time in Shanghai, China, in 2016. Currently, there are 5 Disney resorts worldwide, made up of 13 parks.

There are hundreds of fun and unusual Disney facts out there. We hope you learned something new in our list of 10!