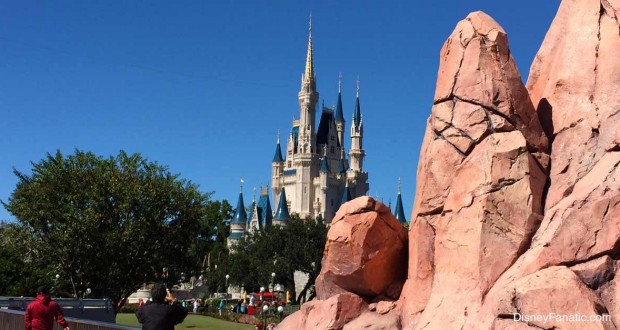 10 Amazing Facts About the Magic Kingdom

The next time you visit the Magic Kingdom, notice the walkways. They are red, and that is because Walt Disney wanted his guests to feel like the “red carpet” had been rolled out for them. Also, cast members who are in character costumes stay in character until the red walkway entrances and exits turn a different color. This is to minimize the possibility of any child seeing any character without their heads, etc.

As you cross the bridge from the central hub into Liberty Square, check out the rocks on either side.
They are not just ordinary rocks; they were mined from a quarry about 6 miles from where General George Washington crossed the Delaware. Disney imagineers work aggressively at procuring authentic or historical items which add to the atmosphere of each land of the Magic Kingdom.

The next time you are in the walkway passing through Cinderella Castle, take a look at the spectacular mosaic designs on the walls. Find the one with Cinderella’s two stepsisters, Anastasia and Drizella. One has a red face and the other’s face is green; red with rage, and green with envy. Don’t try to count them, because there are approximately one million tiles used to make up these scenes!

Just outside of the Hall of Presidents attraction, if you look closely at the second-story windows, you’ll see two lanterns. They bring to life the famous words, “one if by land, two if by sea”, from Henry Wadsworth Longfellow’s poem, “Paul Revere’s Ride”. The magic is indeed in the details!

When you ride this magical carrousel, notice the detailed pictures overhead on the outside. This is the only place in Fantasyland where you will find a picture of Cinderella running with her Prince to their carriage after just being married.

There is a bridge outside the ride, right in front of the big drop. For every third log boat that hits the bottom of the big drop, there is a water cannon that shoots up an extra bit of water and sprays the bridge, soaking everyone who happens to be standing there watching!

There is a large golden figure of a camel just outside of “Aladdin’s Magic Carpets” attraction. Don’t stand in front of Mr. Camel for very long, because he “spits” and you never know when or who he will choose as a target. The secret to his choice is this: The camel is actually operated by a cast member nearby who judges whether or not he can hit the unsuspecting visitors. It’s fun to stand there and watch as people get “squirted”!

This “Beauty and the Beast” themed restaurant is one of the most popular eateries in the Magic Kingdom. The beautifully decorated dining halls are magnificent, and you are welcomed as royal guests.
On the menu, you will find an interesting item, a dessert titled “The Grey Stuff”. It consists of a tasty chocolate cake with a delicious creamy grey colored topping. Yummy for the tummy!

2. The Hall of Presidents—Liberty Square

The landscaping crew of Walt Disney World are fantastic at what they do; mowing lawns, trimming
hedges, watering all the flowers, and maintaining a consistent level of beauty and attention to environmental concerns. You will notice the local ducks, chipmunks, squirrels, birds, etc., roam the parks without being disturbed, in keeping with the Disney animal friendly philosophy.

There is, however, one location in the Magic Kingdom where the lawns are overgrown, and the shrubbery and flowers are dead or wilting away. The area around the Haunted Mansion is never attended to by any caretaker so that the appearance will enhance the mood of this decrepit, old haunted Manor House. When anyone asks why this area looks so unkempt, the answer is that the landscaping cast members are told to “let it go”!

– 21 Impressive Disney Facts… Or Are They Fiction? You Decide