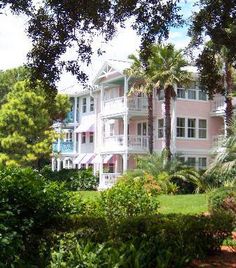 I stumbled upon this “hidden” location on an early morning jog during a stay at Disney’s Old Key West Resort. The trail borders the canal that the resort transportation ferries use to travel to and from Downtown Disney. The paved path eventually merges with a Saratoga Springs Resort walkway and can even lead you to Downtown Disney (as well as the Treehouse Villas via a small bridge). Open from dawn to dusk (there is no lighting) this nature path has you winding around the beautiful Disney Resort grounds. You’ll see the golfers from Saratoga Springs on one side of you, the canal on the other, and even the Characters in Flight balloon soaring in the sky above Downtown Disney in the distance. This off-the-beaten-track trail is peaceful, secluded and wonderfully tranquil. There are no benches along this route, so only go when you have the energy for a long walk/run/bike ride.  Photo credit Pinterest