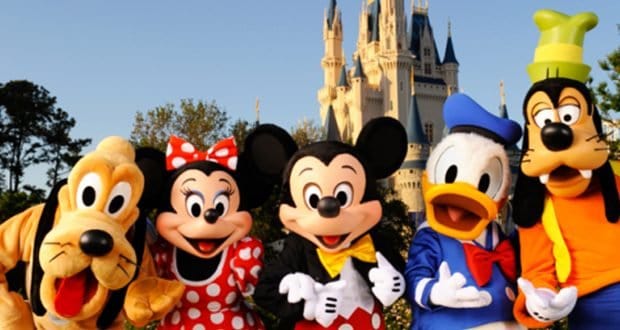 10 Fun Facts About the Characters at Disney World

A trip to Walt Disney World in Florida is an exciting adventure for many reasons. One of the main reasons is getting to meet your favorite Disney characters. Whether you’re 6 or 60, meeting Mickey Mouse or Donald Duck or Cinderella is just like meeting any other celebrity. These are characters you watch on TV and in movies and now you get to meet them in person. It’s a thrilling experience! Characters abound at Disney World. They are in the parks and resorts, parades, attractions and character meals. Your choices are nearly endless. Here are 10 Fun Facts About the Characters at Disney World.

1) No talking! Costumed characters don’t talk (with the exception of the new Talking Mickey in the Magic Kingdom). The reason is that it would be nearly impossible to replicate the voice you are used to hearing from your favorite Disney cartoon characters, so they don’t talk out loud. However, they do a great job of communicating to you and your children through movements and expressions.

2) Fab Five – If you hear someone use the term “Fab Five” regarding Disney characters, they’re referring to Mickey, Minnie, Donald, Goofy and Pluto. These characters are readily accessible throughout Disney World.

3) Talking Mickey – Recently, a new meet and greet opened at the Town Square Theater in the Magic Kingdom, where guests can meet Talking Mickey. Through the use of modern technology, Mickey Mouse is able to talk with guests. Now Mickey can truly meet and greet with his guests. Mickey has a number of cute “bits” that he can do like card tricks, flying around like Peter Pan, and posing like Buzz Lightyear.

4) Requirements – In order to play the role of the beloved mouse, you must be between 4’6″ and 5’2″ tall-no exceptions. The Disney Company believes strongly in the idea of consistency. They have specific height requirement for all their characters, because there is ONLY ONE (wink wink) of each of them. When they go off stage and come back on in a few minutes, they must be the same height.

5) Character Palooza – One of the best character surprises is often referred to as Character Palooza, or the Fantasmic meet. This is a secret, so shhhh!!!! Character Palooza is a fabulous place where you are able to meet characters who appear in the Fantasmic show at Disney’s Hollywood Studios. Because it is an unpublished meet, there is usually a short wait for some rare characters. The characters make a few appearances a day and their times all vary depending on what time Fantasmic is scheduled for that evening. Each set typically lasts from 15-20 minutes, but characters aren’t guaranteed to stay out any certain length and the cast varies from day-to-day.

6) I see you! Because of the size and structure of their costumes, most costumed characters look out of things other than their eyes. For example, Brer Bear looks out the neck and Goofy looks out of his mouth. As a result, the costumed characters try to keep children (and adults) in front of them.

7) Minnie Mouse – Mickey Mouse’s girlfriend made her debut in Steamboat Willie on November 18, 1928. She did not have her own cartoon series, but appeared in 73 cartoons with Mickey Mouse and Pluto. She has been a popular character at the Disney parks ever since.

8) Epcot – When Michael Eisner first became CEO of the Disney Company in the 1980’s, he was surprised that there were no Disney characters in Epcot. Walt Disney’s idea for E.P.C.O.T (Experimental Prototype Community of Tomorrow) was more about the use of modern technology than it was about the Disney characters, attractions and movies. Even after Walt’s death in 1966, the idea of Epcot remained “edutainment”, or education while entertaining the guests. However, Eisner rightly knew the guests wanted to see their favorite Disney characters, so they were added. You can see the Fab Five and other more recent characters in Future World, along with Mary Poppins in the United Kingdom pavilion, Aladdin and Jasmine in Morocco and Mulan in China, in World Showcase.

9) Where can I find…? Can’t find your favorite character? Looking for a picture with that one special character? Ask your friendly neighborhood Cast Members! Cast members have a phone number to call if you want to know where a specific character should be. You can also look up character locations on the My Disney experience app (MDE) on your smart phone or other device.

10) Is it hot in there? In a word, yes. There are no personal air conditioning units inside the costumes. Where in the world would they go? This is why the characters are only out for a little bit at a time — from 20 to 45 minutes, depending on location and time of year. When Pluto has to go get a drink, please let him go. He will be right back.