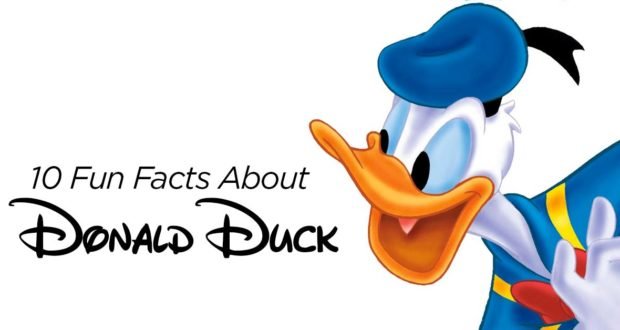 Doesn’t Donald Duck just quack you up? Despite his hotheaded temper, unintelligible ramblings, and sometimes feather-brained antics he has a beaky charm about him that forever continues to win over scores of fans. If you too are a Donald Duck fan then you’re going to love these 10 fun facts.

10. Donald’s Debut And Rise To Fame

Donald Duck made his film debut on June 9, 1934 when he co-started in the Silly Symphonies short “The Wise Little Hen.” But it was one month earlier in the May issue of Good Housekeeping when the first public illustration of the duck was revealed to promote the aforementioned upcoming short. The most noted illustrators credited with drawing Donald Duck over the years are Al Taliaferro, Carl Banks, and Don Rosa. After making his debut, this famous feathered friend of Mickey Mouse went on to appear in well over 200 films (more than any other Disney character) and even led a popular comic strip series. In 1943, the animated Donald Duck film Der Fuehrer’s Face, originally titled Donald Duck in Nutzi Land, won an Oscar as a wartime propaganda cartoon. In addition to works on the silver screen Donald Duck illustrations have been more wildly published than any other cartoon comic character outside of the superhero genre.

The inspiration behind Donald Duck’s voice came about when Walt Disney first heard character voice actor Clarence Charles Nash doing his “duck voice” recitation of Mary Had a Little Lamb. By this time Mickey Mouse was already a moral compass and notable role model, so Walt Disney was seeking an antithesis of sorts—a friendly foil to Mickey’s positive mild mannered ways. An angry squawking duck would do just the trick! Clarence Nash voiced Donald Duck from 1934 into the mid-1980s when Tony Anselmo took over under Nash’s training. To deliver that distinct duck voice the Neumann TLM-170 microphone was used for its ability to round out high tones, warm Donald’s voice, and soften the “splat” in his many aspirations.

Did you know that Donald Duck was modeled after a real duck species? Donald is an American Pekin, to be exact. This breed of duck actually has its origins in China but became a popular commercial duck choice for U.S. breeders after being brought over in the late 1800s. Pekin ducks are recognizable by their large bodies (larger than most other duck breeds) and their white (or sometimes creamy colored) plumage.

Donald Duck is the only major Disney character reportedly known to have a middle name. In the 1942 cartoon, Donald Gets Drafted, it is brought to light that his middle name is “Fauntleroy,” making his full name “Donald Fauntleroy Duck.” On another side note, while the name “Donald” serves well alliteratively, the decision to choose this name specifically may have come from the renowned Australian Cricket player, Donald Bradman. While touring North America with the Australian team in 1932 Bradman made headlines by revealing was being dismissed for a “duck” against the New York West Indians. At the time Walt Disney was already in careful contemplation about who would be Mickey Mouse’s new friend, and hearing about “Donald’s duck” throughout the press might have had a nice ring to it.

There’s been a lot of back and forth surrounding Donald’s real birthday. In keeping with cartoon tradition, a character’s birthday is usually recognized as the official date in which they made their premier. This would place Donald’s birthday on June 9, 1934. However, in Walt Disney’s The Life of Donald Duck—the authorized biography published in 1941, it was revealed that he was actually born on a Friday the 13th. Perhaps this is why he isn’t such a lucky duck! One late ’40s cartoon in particular divulged Donald’s date of birth as being on March 13. So in working with all the facts, the evidence supports that Donald Duck’s birthday is most likely March 13, 1914. All the same, Disney Parks refer to Donald’s debut date when scheduling special birthday celebrations and events.

Donald has a pretty extensive family lineage, which has been traced, clarified, and lined out accordingly over the years. It has been confirmed that he shares ties, either through birth or marriage, with just about every family in Duckburg. Donald’s parents are Quackmore Duck and Hortense (McDuck) Duck. His twin sister is most notably referred to as Della but has been alternately known as Dumbella or Thelma. She is the mother of Huey, Dewey, and Louie. Many sources claim that she is married to Daisy Duck’s brother, whose surname is also Duck (no relation). Don Rosa explained that the name “Duck” is common, much like the surname of Smith or Jones, when he published his own Duck family tree in 1993, which was included in a 12-part comic series. This offers an explanation into why Daisy’s last name is also Duck and also why Huey, Dewey, and Louie refer to both Daisy and Donald equally as aunt and uncle. Then of course there’s Scrooge McDuck, brother to Donald’s mother Hortense. Other feathered relations to Donald include the Gander, Coot, and Goose families, with a little Loon, Grebe, Mallard, Gadwall, and O’Drake thrown in as well. Birds of a feather really do flock together, at least in Donald’s family.

Ducks in general are not colorblind, but there are some implications that Donald Duck may be at least a little colorblind to certain colors. This idea comes from the 1942 wartime cartoon Donald Gets Drafted, in which after correctly identifying a red card during his medical exam, he is unable to identify a green card (that even has “green” written on it). Instead he claims that the card is blue! But that’s “close enough,” and he is still permitted to join the army despite falling short in other areas as well. In a world of over-sized mice and bright colors, we can imagine that colorblindness might make for a cranky Duck!

Donald Duck has been the represented mascot for the University of Oregon’s Fighting Ducks teams since 1947.  Walt Disney himself and the then-athletic director Leo Harris made an informal agreement allowing Donald’s trademark image to be used for such purposes. However, in 2010 the Walt Disney Company and University of Oregon officially decided that the represented duck mascot on the sidelines was NOT in fact the world-renowned Donald Duck but rather a “different” duck who just happens to look a lot like Donald. This relieved many of the binding rules and needed Disney permissions for the school when participating in rallies and events and also freed Disney from being considered partial or directly endorsing a university. Still, the fact remains that Donald holds the record for being the one and only major film and television cartoon character to be the mascot of American university.

Donald was even awarded with his very own Star on the Hollywood Walk of Fame. His official induction date was on August 9, 2004, and his star marks the 2,257th addition to the honored celebrity display of both real and fictional stars. There are only a handful of other cartoon Disney characters with stars as well, including Snow White, Tinker Bell, Winnie the Pooh, and Mickey Mouse, who was the first animated character ever to receive a star.

Donald Duck is notably one of the most popular, beloved fictional duck characters of all time. His lasting legacy continues to charm young and old fans alike, with new movies and shows, featured illustrations, and of course character appearances in Disney parks and other affiliates. There’s just no denying that Donald is a feathered favorite.