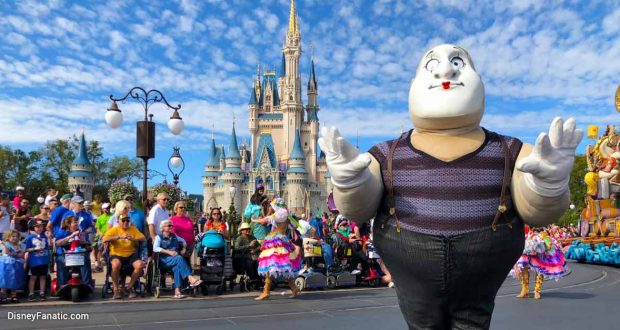 Not only will this behavior not win you any friends in the queue, but it can get you removed from the parks. Disney doesn’t tolerate this behavior—and for good reason—everyone in the parks wants to experience all Disney has to offer, but during well-attended seasons of the year, there can be a wait time to experience the magic. And everyone else has to wait too, so why should the rule not apply to some? Don’t jump the queue. It’s rude. It’s disrespectful to other Guests, and it might add 24 hours to your wait time since you could be removed from the park for the rest of the day if you choose to try it.

9. Pretending to be a Character

If you are 14 or older, you won’t be permitted to wear costumes in the parks. This is so there is no confusion about which people are Cast Members and which are Guests. Occasionally, a Guest has masqueraded as a Disney character in order to impede park operations, and Disney takes that very seriously. There are exceptions to the rule about costumes at Mickey’s Not-So-Scary Halloween Party, but outside of that event, don’t try wearing a costume in the parks, especially if you can’t pass for younger than 14.

8. Refusing to have your bags checked

Disney World’s rules and regulations specifically state that Disney Cast Members reserve the right to check any bags that a Guest wants to bring into a Disney theme park. This ensures the safety of all Guests. If you refuse to have your bags searched, you will not be granted admission into the parks. So don’t even try—you won’t get into the parks with bags that aren’t searched by a member of Disney’s security team. It doesn’t take very long—simply unzip any bags you are carrying and have them ready for the security officer to look through. Then you’ll be on your way.

Even if you have a CHL (concealed handgun license), Disney World does not permit Guests to bring handguns or any other type of gun into the parks. Disney’s policies and procedures further state that Guests are not permitted to bring in any items to the parks that look like weapons, which means your little boy will not be able to bring in his water guns. Again, this is for the safety and protection of everyone who visits the parks.

Simply stated, Disney World is a big place, but there’s no room there for profanity, vulgar language or inappropriate talk. Disney World is a family vacation destination, and this kind of behavior on the part of any Guest, whether toward his own family members, other Guests or Cast Members will not be tolerated in the parks. You’re at Disney World—where there are a million things to be excited and happy about. So, as Mom always said (and so did Thumper from Disney’s Bambi), if you can’t say something nice, don’t say anything at all.

5. Exhibiting blatant disrespect for, or disobedience toward, a Cast Member

When a Cast Member gives instructions or directions to Guests, whether those Guests are minors or adults, those Guests are expected to comply with the instructions. After all, Cast Members are only giving instructions in an effort to guarantee the safety and well-being of Guests visiting in the parks. Blatant disregard for requests made or directions given by a Cast Member can result in removal from the parks, but it can also result in a dangerous situation (i.e., standing up in a moving ride vehicle when you’re asked to be seated). Don’t take the chance. It’s not worth it.

4. Bringing in alcohol or illegal substances

Let’s not validate this behavior with a long explanation. Buy alcohol in the parks. Leave yours at home. And if you feel the need to bring in illegal substances, you probably shouldn’t even consider visiting the parks that day.

3. Using someone else’s ticket or MagicBand

If you attempt to use someone else’s ticket, the Cast Member at the gate will be alerted—so don’t try this one at all. Guests try to access unused days on someone else’s ticket or MagicBand from time to time, but they are caught. That’s because the admittance system at Disney World is set up to use both a Guest’s ticket or MagicBand and his or her fingerprint simultaneously in order for the Guests to be granted admission. When the fingerprint doesn’t match the ticket, the system is alerted. (This can happen sometimes when a Guests uses a different finger even with their own ticket.) But if you are caught trying to use another Guest’s entitlements, you won’t be allowed admission. It’s not worth the risk.

2. Swimming in the Seven Seas Lagoon

Yes, you read that correctly. It sounds beyond the believable that people would even attempt such a “feat,” but it has happened—more than once—with the same outcome each time—removal from the parks. There are two water parks on Disney property, as well as countless themed swimming pools at each Disney resort. Go swimming where you’re supposed to go swimming. It just makes sense.

There are a number of designated smoking areas throughout the Walt Disney World Resort, and this is for the comfort and convenience of Guests who are smokers. But outside of those specifically designated areas, smoking is not allowed in the parks at Disney. This ensures the safety and comfort of all Guests who visit. Smoking areas are well marked in the parks, but if you need assistance finding one, ask a Cast Member or open the My Disney Experience app to find the smoking area nearest to you. If you light up outside these areas, you’ll be asked to put out your cigarette. Refuse, and you might find yourself put out—of the parks for the rest of the day.