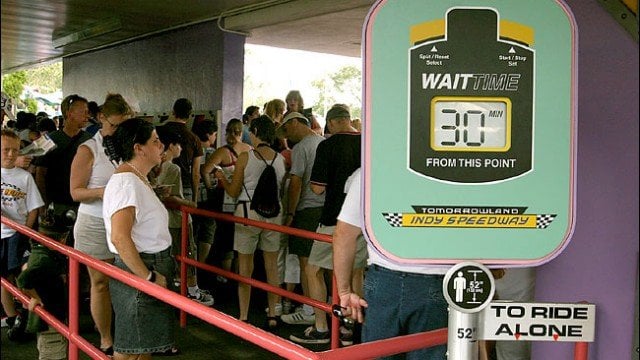 Jumping the queue (aka “cutting in line”)

Not only will this behavior not win you any friends in the queue, but it can get you removed from the parks. Disney doesn’t tolerate this behavior—and for good reason—everyone in the parks wants to experience all Disney has to offer, but during well-attended seasons of the year, there can be a wait time to experience the magic. And everyone else has to wait too, so why should the rule not apply to some? Don’t jump the queue. It’s rude. It’s disrespectful to other Guests, and it might add 24 hours to your wait time since you could be removed from the park for the rest of the day if you choose to try it.

Pretending to be a character

If you are 14 or older, you won’t be permitted to wear costumes in the parks. This is so there is no confusion about which people are Cast Members and which are Guests. Occasionally, a Guest has masqueraded as a Disney character in order to impede park operations, and Disney takes that very seriously. There are exceptions to the rule about costumes at Mickey’s Not So Scary Halloween Party, but outside of that event, don’t try wearing a costume in the parks, especially if you can’t pass for younger than 14.

Refusing to have your bags checked

Disney World’s rules and regulations specifically state that Disney Cast Members reserve the right to check any bags that a Guest wants to bring into a Disney theme park. This ensures the safety of all Guests. If you refuse to have your bags searched, you will not be granted admission into the parks. So don’t even try—you won’t get into the parks with bags that aren’t searched by a member of Disney’s security team. It doesn’t take very long—simply unzip any bags you are carrying and have them ready for the security officer to look through. Then you’ll be on your way.