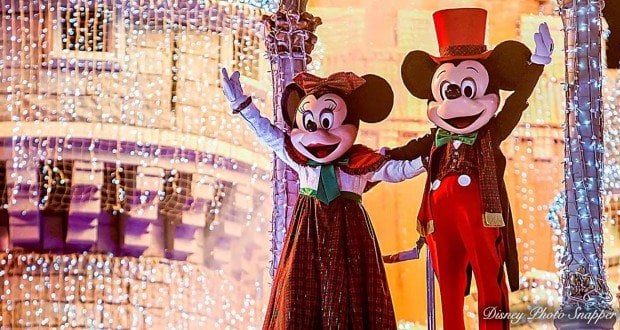 Twinkling lights strung overhead. Snow flittering to the earth below. Woolen mitten cupped mugs of steaming hot cocoa. Candy canes, comfy sweaters and childlike wonder. Oh, yes, and Walt Disney World. These are all things that come to mind when I daydream about winter. So what does Disney have to do with it? A big part, actually. They know how to do winter right and they make sure there’s no place you’d rather be than right there on their majestically decorated property. Because of this I make it a part of my annual tradition to visit Disney World around this time of year, cementing some pretty awesome and cherished seasonal memories.

I know, I know, winter isn’t just about what all those cozy Pinterest images would have you believe. There’s sludge. And angry, biting winds. There’s snow for so many days on end that you find yourself typing things like, “Bahama Cruise” and “How Not to Lose My Eva-Lovin’ Mind during Endless Snow Days” into your Google search engine. But you know what is totally worth mentioning that just might keep your sanity intact? Walt Disney World is located in Florida, which rarely ever sees flurries let alone legitimate snow, and the weather is as close to perfect as you can get during the winter season. And there is literally SO much going on during this season that booking your ticket to Orlando might just be the smartest thing you do all year. Here is a list of the top ten reasons to visit Walt Disney World in the winter!

Just to give you an idea of how tantalizing our weather is here in Florida during winter (so what if the summers here make it feel like our skin is melting off?) the average high is 73 and the average low is about 51. Walking around the theme parks during this time of year is just so incredibly pleasant that you can crunch on a Kakigori (Epcot’s Japan pavilion’s version of a snow cone) or sip at a hot cocoa and either one would be perfectly suitable for the steady climate.

9. Holiday Displays at the Resorts

Delightful holiday renditions of festive joy are created in the form of massive, ingenious and impressive sugar displays at each and every Walt Disney World Resort during November and December. From life-size real gingerbread houses to classic Disney characters made entirely out of sugary sweets to tiny wintery villages with miniature trains, you are certain to enjoy admiring the yuletide glee in every resort lobby (all the while secretly wanting to reach over the rope and grab your own “sample”). In addition to these spectacular creations you will find beautiful Christmas decorations like lofty Christmas trees as far as the eye can see, bright wreaths and glittering garland all over Disney property. That being said, do NOT forget your camera at home! Many of these resorts will also have seasonal indulgences for purchase, such as gingerbread shingles, Stollen bread, and chocolate-peppermint bark. And don’t forget to swing by The Grand Floridian Resort to get a free sampling of roasted chestnuts (yum)!

“RunDisney” has become so popular that you can pretty much find a uniquely Disney-themed race any time of the year. But January’s marathon weekend holds a special place in my own heart, as well as many others who have been running (or cheering on their family/friends during) the original and official Walt Disney World Marathon. Like I said previously, because of the increase in popularity and attendance Disney has added a major race event for practically every month of the year, but it all began in with its inception in January of 1994. My father is a runner (and I am now too thanks to him!) and we grew up cheering him on at these amazingly put-together events. There is so much excitement brimming in the air during the first full weekend in January and because of the gloriously cool temperatures coupled with the fact that it’s become a tradition for many runners, this particular race weekend sells out extremely fast. Whether running or not this weekend, you will inevitably bump into tons of runners on Disney property (be sure to give them a word of encouragement before the race or a “congratulations” if you see them wearing their medal!). Race weekends always bring extra crowds for the theme parks so keep that in mind, but in my opinion it certainly is exciting to see so many individuals challenging themselves and even if you are a non-runner you can enjoy the race from the sidelines as a spectator.

I get goosebumps just thinking about this. Epcot is downright brimming with beauty in the winter. The Candlelight Processional is a feast for your eyes and a glorious celebration for your ears combining a full orchestra and mass choir all taking the stage to create a Christmas tree-like display of singing carolers. There is always a celebrity guest narrator who brings to life the Christmas story from the Bible, putting your mind in just the right place during this season. This event has become a tradition for many families during this time of year and is the perfect way to start or end the holiday season as it is held nightly through November 28th-December 30th.

This is one of those “hard-ticket” events that are not included in your theme park admission. Held every year on select nights in November and December at the Magic Kingdom, this phenomenal celebration includes special stage performances, seasonal treats, streaming holiday music, dance parties with Disney characters, a jolly parade and a breathtaking fireworks show! And to top all that off, as night settles into the Magic Kingdom, Cinderella’s Castle will transform into a twinkling ice castle just like the one in Frozen before your very eyes.

Records indicate that one of the BEST times to visit Disney in both areas of cost and crowds is during the “value” season which starts at the beginning of January (with the exception of Disney Marathon Weekend) and ends mid-February. Smaller crowds, wonderful weather and lower Disney Resort rates? Where do I sign up?

4. Holidays around the World Showcase in Epcot

What better way to experience and learn about the unique holiday traditions that follow every country than to stroll along Epcot’s World Showcase in the months of November and December! Each country will have a storyteller that will captivate you with tales of lore from their heritage and traditional customs held during the Christmas season. Head over to Canada and learn from “Nowell” who allows children and adults to gather around him as he energetically recalls customs of Canadian Christmases. Other examples include stories from France’s Pere Noel, Italy’s LaBefana and, of course, America’s Santa Claus. Other “sprinklings” of the holiday season around Epcot include things like a gospel choir performing Christmas songs on the Fountain Stage and Epcot’s Illuminations: Reflections on Earth getting an additional 4-minute extended holiday-themed finale, “With Peace on Earth.”

The seasonal offerings of food and beverages alone are worth coming to Disney for in November and December! I am a weak creature when it comes to holiday-inspired dishes, I’d happily gulp eggnog year-round if these grocery stores would start accommodating me. Everywhere you look, and I mean everywhere, Disney is serving up some seriously yummy, traditional, seasonal grub. Epcot’s World Showcase features food and drink items such as pecan maple bark in Canada, hot applejack cider in the United Kingdom, and savory turkey or sweet potato casserole WAFFLES at the Promenade. If that doesn’t have your lips a-smackin’, you can sip at delicious and various-flavored hot chocolates throughout the Disney property (as well as eggnogs!). Many resort and theme park dining options will reflect seasonal meals (expect a lot of cranberry relish and rosemary-seasoned dishes!). You can also grab deliciously authentic gingerbread cookies at any resort or theme park as well.

Would you like a Mickey ornament to hang on your tree or a deeply red, velvety Disney-inspired stocking to adorn your fireplace? The merchandise Disney offers in the months leading up to the holidays are so wonderfully unique and by golly, jolly, that you might just have to increase your Secret Santa budget this year. If you need Christmas decorating inspiration or gift ideas you don’t need to look much further than the Disney souvenir stores or resort gift shops. From holiday-themed sweaters to gorgeous snow globes to doormats, there is something for everyone! Festive reds, bright greens, glittery gold and silver—so many merry ways to give and receive at Disney World!

With a stunning and breathtaking array of millions of glittering lights perfectly synchronized to pulse-pumping holiday-inspired tunes, your senses will never be as magnificently stimulated as they will be standing on the Streets of America at Disney’s Hollywood Studios. Your spirit will be moved and your hairs will be standing on end during these powerful performances which are so incredibly majestic that you have to see it to believe it! Everywhere your eyes will scan you will see bright, glowing bulbs of color as well as Christmas displays like the Nativity Scene, twirling carousels, toy soldiers and Santa and his reindeer. Trust me, you won’t want to leave, these “dancing” lights are just that captivating! In addition to the lights, “snow” falls from above you, creating a wintery presence even in the heart of Florida. Grab yourself spiced eggnog at one of the carts or some cinnamon roasted nuts and take your time strolling along and enjoying the season with your friends and family!

– 12 Reasons to Visit Walt Disney World in the Fall