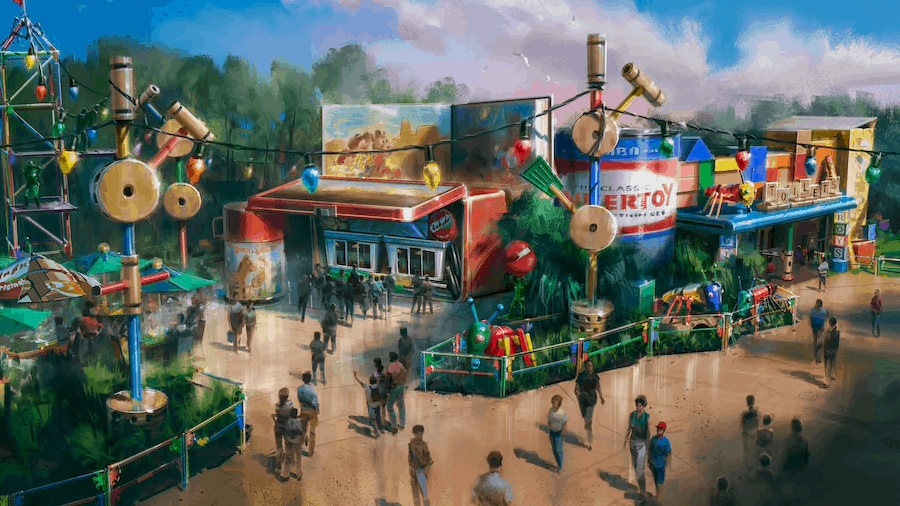 As Toy Story Land is Andy’s toy-filled backyard, it only makes sense that his lunchbox can be found here, too. At Woody’s Lunch Box you can enjoy rootin’ tootin’ grub in the form of Toy Story-themed dishes, whether it’s breakfast, lunch or dinner. Best to keep Mr. and Mrs. Potato Head away, though, because if there’s anything potato-related on the menu, they might just fall apart!

3. Fill Your Own Toy Box

Disney World Resort is already home to plenty of Toy Story-themed merchandise, but at Toy Story Land it’s all going to be in one place – much like your bedroom, or in this case a very messy backyard! Whilst no stores have been announced yet, you’ll certainly find merchandise inspired by the area’s attractions. Even though you’ll feel like a toy yourself here, even toys have toys, right?

2. Find a Friend in Other Characters

With three Toy Story movies in existence and a fourth scheduled for release in 2019, there are far more characters than just Woody, Buzz and Jessie. So as you go about your adventure, expect to see the ever-serious Green Army Men from time to time, too. And rumor has it that the infamous and interactive Mr. Potato Head audio-animatronic will even be making a return!

There’s no denying that PhotoPass and MemoryMaker are invaluable add-ons. Naturally, though, you’re going to want to take a lot of your own photographs, too. So flip your phone camera right around and go on the look-out for the biggest character models, the tiniest details, the most dazzling attractions, and anything else you can think of to serve as your backdrop!

Toy Story Land opens June 30, so now’s the time to plan your visit to Disney World Resort. Just make sure you can get your buzz-buzz-buzz on at Toy Story Land by using FastPass+ and downloading the My Disney Experience app. Then you’re free to “play nice”!

Left 2 of 2 right
Next: Walt Disney World Through the Years; Then to Now, to What’s Next?