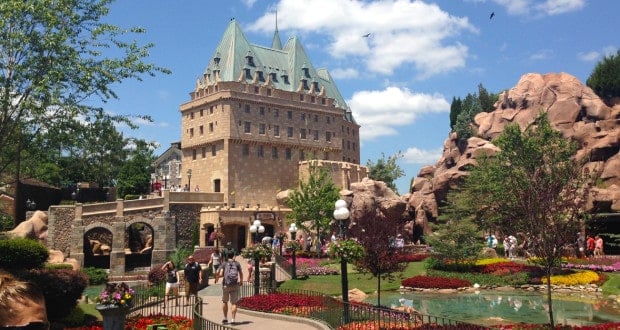 The Canada pavilion at World Showcase in Epcot is often passed over by guests on their way to another pavilion, until it’s time for lunch or dinner. While there may not be much in the way of entertainment here, there are so many little details found here that you’re sure to love.

This group performs on the stage in between the Canada and United Kingdom pavilions. Several times a day they demonstrate throwing axes and sawing logs in a variety of games. Some seating is available for this show, so arrive early got a good spot. Previously, this stage hosted the band Off Kilter which attracted a much larger audience and is still missed by fans today.

If you’re looking for a quick snack as you journey through Canada, you’ll be able to get freshly made popcorn at the snack cart located at the front of the pavilion. Guests also have the option of getting souvenir bucket as well.

The totem poles outside are fun to look at if you have a few minutes. So much detail is included here as well as history. Two of the poles are actually made of fiberglass, but the third, the one featuring a raven, was carved from a 30-foot long log right in Epcot. During its creation, guests could watch as artist David Boxley created the totem pole which was officially added to the pavilion in April 1998. This was done to create a more authentic feel and pay tribute to the Native American culture in Canada.

In addition to the Native American tributes, a large building can be seen in the Canadian pavilion which is called the Hotel du Canada. This was inspired by a famous historic hotel in Ottawa. It looks like it should be six stories tall, but is actually only three. This is the opposite of the effect used in American Adventure. You can also find maple leaves hidden throughout the pavilion along with hidden Mickeys, snowshoes and kayaks.

6. The Waterfall and Mountains

A demonstration of the Canadian landscape wouldn’t be complete without including some of its natural elements. Next to the hotel is an area meant to look like a dense forest with the types of trees you’d be likely to find there. Next to that is a smaller version of the Canadian Rockies. IF you walk along the path to the back of the pavilion, you’ll also find a 30-foot waterfall. This makes for some great photo opportunities as well as a great place to enjoy the scenery.

The Canada pavilion also takes care to show off its gentler side with an expansive garden that is similar to the Butchart Gardens in Victoria, British Columbia. This is actually the largest garden found in World Showcase and one of the most difficult to care for due to all the details included.

There are two main gift shops in the Canadian pavilion. The Wood Cart is found on the promenade and sells an assortment of engraved gifts, stuffed animals, flags, and wine-themed gifts. Indoors you’ll find Northwest Mercantile where you’ll be able to find hockey jerseys, maple syrup (including syrup flavored popcorn), Christmas items, and a small selection of Canadian wine.

Besides the wine found in the gift shops, guests 21 and older can enjoy a variety of alcoholic drinks ranging from draft beer to specialty drinks called Unibroues and the Torontopolitan. For additional drinks, you’ll have to make a reservations for the Table Service restaurant in the pavilion.

What really tends to draw crowds in is the O Canada! show in the circle theater that gives guests a 360 degree view of the country. Hosted by comedian Martin Short, a Canadian native, the movie is both funny and beautiful. It debunks the stereotype that all the country has to offer is snow and cold weather. If you have the time, stop in and take a look for yourselves.

Of course, the biggest reason to visit the Canada pavilion is to eat at Le Cellier. This steakhouse is actually one of the most popular on the Walt Disney World property. Its cheddar cheese soup made with Moosehead beer and smoked bacon is extremely popular, as are its entrees of New York strip steak, filet mignon, bison strip loin, chicken and waffles, and so much more. The interior is cozy, yet a little cramped and dark. If you’re using the meal plan, this will take up two Dining Plan credits.

There may not be a lot in Canada to jump out and grab your attention, if you take the time to notice all the detail that’s gone into the pavilion, you’ll find this area to be beautiful and interesting.