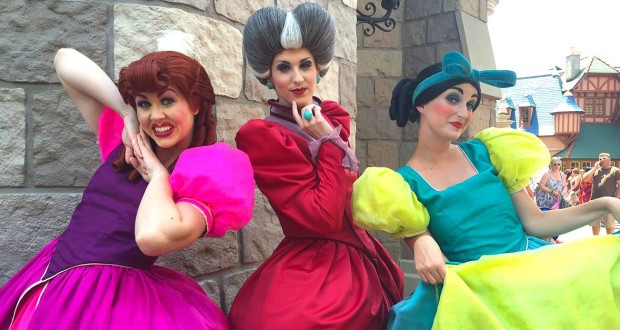 No matter your age, character meet and greets are a special treat at Disney World. Even the bigger “kids” who know how it all works get pulled into the magic of talking to their favorite characters and having their picture taken with them. Of course, some characters are more popular than others, but there are number of meet and greets you may be missing. Of course, Disney is always changing and trying to keep things fresh, so these locations may vary over time! But that’s part of the fun of a Disney Adventure – taking the time to look for the unexpected!

The only place you can get up close and personal with the Beast from Beauty and the Beast is in his very own castle at Be Our Guest Restaurant. He used to appear with Belle at the France pavilion in Epcot, any may every so often now, but it’s not a guarantee. The only guaranteed way to get your picture taken with him is at his home, and reservations are required for meals. No reservation, no meet and greet with the Beast.

Her meet and greet station in Magic Kingdom is actually pretty large. Heading down Main Street, if you walk along the right-hand side of the castle you’ll find where Merida spends her time. While her location isn’t exactly a secret, and meet and greet times are posted outside and through the My Disney Experience App, the greets themselves can take up time as you also end up playing some of the games featured in the Brave movie. Due to the long wait, lots of guests skip it.

Disney’s Animal Kingdom is more known for its animals than for its characters. Tarzan, whose movie of the same name became popular in the 90s/early 2000s, used to be the highlight of this meet and greet. Now, as Disney is emphasizing The Lion King more and more, Tarzan has been replaced with Timon! This goofy meerkat is a great crowd pleaser and loves to have his photo taken! Try hunting for him near the Discovery Island Trail. Rafiki is also known to show up in Animal Kingdom near the Tree of Life!

Similarly, Pocahontas was also popular in the 90s and as the daughter of a chief, is technically a princess. She may not be the most popular princess, but she is still a fan favorite. Years ago, Pocahontas actually had her own show, but now simply has a meet and greet station at Character Landing on Discovery Island, just before you head into DinoLand. There are actually a number of characters on Discover Island. Walk around and see who you can find.

Cinderella’s step-mother and two step-sisters, Anastasia and Drisella, can be found for their meet and greet over by the Fantasyland/New Fantasyland border. What makes this an easy to miss experience is that the times the family is available aren’t posted. You either happen upon them by chance, or you don’t.

Peter and Wendy, while they have times posted for their meet and greet, have been known to appear in a few locations. Currently, the Disney World website places them in Fantasyland, but they’ve been known to show up in Adventureland as well. If you can peg them down, be sure to stop for a picture.

Usually between Easter and Labor Day, you can find Lilo, Stitch, or both near the entrance to Typhoon Lagoon. Some families skip this park or visit during the off season and therefore miss this meet and greet opportunity. This silly duo can also be found at O’hana Restaurant at Disney’s Polynesian Village Resort.

The couple from Agrabah can sometimes be found in the Magic Kingdom in Adventureland, but did you know there’s also a less crowded meet and greet station for them in the Morocco pavilion at Epcot? Tucked away in the back, in a pavilion many guests skip, there’s actually an indoor, air conditioned meet and greet area. Much more comfortable for those hot summer days!

Similarly, Pooh and Tigger get huge lines outside their attraction at Magic Kingdom, but if you visit the United Kingdom pavilion at Epcot and check the gift shop in the back. You’ll find an area devoted to the Winnie the Pooh stories. Go to the back of the store and you’ll find characters from the Hundred Acre Woods. Pooh and his friends are most easily seen with a dining reservation at the Chrystal Palace.

Unlike their friend Buzz Lightyear, whose meet and greet station is out in the open, Woody and Jessie’s meet and greet area requires a bit of searching. Between Big Thunder Mountain and Splash Mountain is a bathroom area. Walk towards it, down the stairs, and to the right you’ll find Woody and Jessie. Even when these attractions are closed for renovations, the characters are usually still found. Since the opening of Toy Story Land in Hollywood Studios, Woody, Jessie and Buzz have been found hamming it up in “Andy’s Backyard”.  Often Buzz is near the park entrance, Woody is near Toy Story Mania, and Jessie is near the fence with Andy’s name on it.

If you’re looking to see several Disney characters in one place, especially those rare characters, you’ll have to check out Characterpalooza. Times and locations for this event varies depending on how many show of Fantasmic there are that day (two events when one show is playing, one event when two shows are playing). They can usually be found a few hours before Fantasmic starts, around 4pm at the earliest, around the Streets of America. The location changes at times and the meet and greet itself isn’t posted on any map. It’s not even on the website. If you’re interested, ask a Cast Member to be sure.