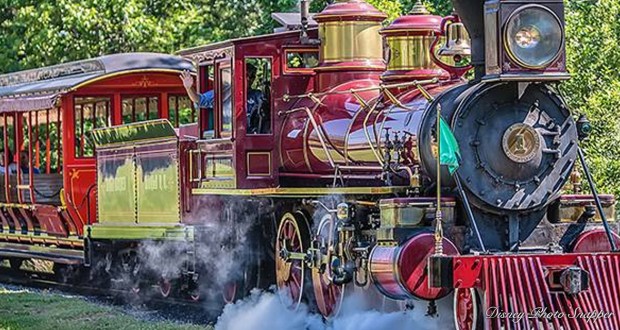 If you’ve been reading our articles, then you know that you need to reserve FastPasses for headliner attractions, or ride early in the day. On any given day of park touring, you probably have an idea of what your family will make a bee-line for. But what about the oft-forgotten attractions that don’t require FastPasses? These attractions are all great for slow-paced afternoon touring, when the sun is hot and the lines are long for all of the headliners.

This is an attraction that always makes me feel a little closer to Walt Disney himself. Walt loved stream trains, and even had one in his back yard! You won’t necessarily get to see a whole lot on your travels, but it’s a nice relaxing ride and a good way to get from one side of the park to another without walking (although walking will prove faster in most cases). This is a great mid-day activity when you need a break from the heat.

Disney goes to a lot of trouble to make the “streetmosphere” of the parks exciting and thematically appropriate. There are a wide variety of street performers throughout the parks. There are amazing musicians and acrobats to be seen in the World Showcase at Epcot, multiple musical acts at Animal Kingdom, and comedic actors in Hollywood Studios. The Magic Kingdom has its very own “residents” of Main Street, as well as a barbershop quartet!

While many people love the People Mover, there are others who don’t really have any idea of what the appeal is. Like the railroad, the People Mover is ultra-relaxing. It’s also a great way to see inside many of your favorite attractions. You’ll glide across Tomorrowland and hear narration about the attractions below, getting to glimpse inside them at times. The PeopleMover even goes through Space Mountain- if you’re lucky, you’ll be on the ride when Space Mountain is down, and you’ll see the ride with the lights on!

“There’s a great big beautiful tomorrow, shining at the end of every day.” There’s also a great big beautiful gem of an attraction tucked in the back corner of Tomorrowland- The Carousel of Progress. Created originally for 1964 World’s Fair, the Carousel of Progress gives us a glimpse into the life of an animatronic American family at different time periods in American history. Honor Walt and take the time to enjoy this is classic Walt Disney original.

My favorite free souvenirs from the parks are the sketches I made in the Animation Academy classes! You’ll get to sit in on an animation class lead by a talented artist and produce your very own sketch. Leave any perfectionistic tendencies at the door, because there’s no eraser in this class. Just relax and do your best. This is an experience that is probably best for older children, teens, and adults. Young children may become frustrated at the speed that the animator works.

The Pangani Forest Trail and the Maharajah Jungle Trek are worth every minute spent exploring them. You’ll see some magnificent animals up-close, including tigers, gorillas, massive bats, and hippos. The paths are very well shaded and are best explored at a leisurely pace.

The Tree of Life is hard to miss, but plenty of people miss getting an up-close view of the intricate details. There are hundreds of unique animals carved into the tree, and you can really only see all of the angles from the Discovery Island trails. You’ll also see several real animals scattered through these trails as well.

As you climb higher in the treehouse, you’ll see various “rooms” that the family created as they lived on the island. The scenes are interesting on their own, but I especially like this attraction for the views it offers of the Magic Kingdom. There are a lot of stairs to climb on this attraction, so be aware of that. While it is high, it feels very safe and enclosed.

I’ll admit that it took me until my 6th trip to Walt Disney World to actually check out Tom Sawyer Island. While it’s not something that I would run to first thing in the morning, it does provide a nice respite from the crowds. Access the island by taking the river raft near Big Thunder Mountain Railroad across the water. Once on the island, you’ll discover plenty of trails that weave up and around the island. You’ll also encounter a rope bridge and caves to explore. Although I know some people let their kids roam freely in this area, I would recommend accompanying your child. Some of the caves are actually rather dark, and have some dead-ends. It wouldn’t take too long for panic to set in if a child felt lost or trapped.

Hungry? There are plenty of sit down restaurants in the World Showcase, but there are also smaller spots to stop for quick bites. Don’t miss the ice cream in France! Art, sculpture, architecture, and recreations of natural wonders are also yours to view if you take the time to look. Canada has a nice wooden path that leads to a waterfall at the back of the pavilion. Japan has a gallery showcasing traditional and modern Japanese art, including anime. The details in the architecture in Morocco are stunning. These are just a few examples! Every country boasts something special.

Even the gift shops in the World Showcase are all quite interesting, whether you want to see traditional items from the country or just want to get a Mickey pin with the country’s flag on it. Japan has a really amazing gift shop that any Hello Kitty or Pokémon fan will love. Edibles make great souvenirs, so if you’re looking to bring home a few gifts, perhaps some English tea or Canadian maple syrup will do the trick.

2. Everything in Liberty Square- Magic Kingdom

I’m guilty of this one. Sometimes “historical” conjures thoughts of “boring.” However, Liberty Square has some great things that are not to be missed. Columbia Harbor House is a fabulous counter service restaurant. The Liberty Square Riverboat provides a nice, relaxing break to touring the park. You’ll drift past Big Thunder Mountain Railroad and will navigate around Tom Sawyer Island, giving you some different views. Also take a look at the Liberty Tree, with its symbolic lanterns. Don’t miss the Hall of Presidents- not only is it a moving show with amazing animatronics, but it also displays the Great Seal of the United States.

I’m going to call this an “attraction”, although it’s more of an activity. File this one under “freebies”, too, since this is a great free souvenir opportunity. Here’s what you have to do: visit one of the two locations where you can obtain Sorcerer cards (either at the Firehouse, or in Liberty Square). You’ll receive a video introduction to the quest from Merlin, pack of 5 cards, a key card, and a map. Then, you’ll be directed to one of the magical portals throughout the park. When you arrive, hold your key card up to the portal and a scene will appear magically in what looks like a window. Listen to the characters, as they will tell you what your mission is. Your goal will be to defeat a particular villain. Use one of your sorcerer cards to cast a spell when you encounter the villain. Each quest will take you to several different portals; you don’t have to finish a quest in any particular amount of time, so you can play as much or as little as you like. You can receive one pack of cards per person per day, provided you’ve actually visited a portal and have been playing. This is tons of fun for kids and adults- the entire first level of the game requires no skill, so just let loose and have fun!

Have you experienced all of the activities on this list? If not, I hope you have an opportunity to check them out on your next visit.