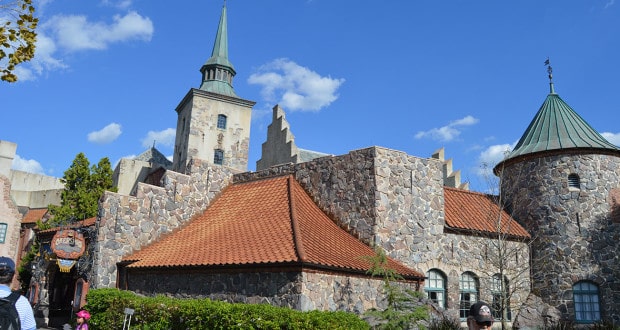 At World Showcase in Epcot, guests have the chance to visit countries from around the world in a matter of hours. One of these countries is Norway. Even before the Disney film Frozen was released, drawing more attention to the country that inspired the fictional town of Arendelle, the Norway pavilion was and still is a great place to stop with lots of things you’ll love about this country.

The pavilion is set to look like a Norwegian village and actually displays four different kinds of architectural styles that include Setesdal-style, Bergen-style, Oslo-style, and Alesund style. This includes grass on the roof of some of the shops. In Norway, animals would graze on the roofs to keep the grass from overgrowing, but at the pavilion Cast Members have to go up there to trip it themselves.

In the back corner of the pavilion is a small waterfall that is both a great photo opportunity and a place to watch guests as they went on the Malestrom attraction. While the ride has closed, the waterfall is still there and the new attraction is rumored to follow the same track.

If you approach the Norway pavilion in a clockwise direction, having past Mexico, the stave church is the first thing you see. Modeled after the 13th Century churches found in Norway, this iconic style is something unique to the area. Outside of the church, towards the courtyard, is a statue of Olaf II who was king and Patron Saint of Norway.

9. Inside the Stave Church

Most guests pass by the church thinking it’s just for show, but you can actually go inside. In years past it was a museum of Viking clothing, weapons, and other artifacts. Now it serves as a display for how Norway influenced the Frozen film.

The gift shops in the Norway pavilion are more than just Frozen merchandise. Once you get past all the princess dolls, you get into the more authentic pieces from Norway. From the jewelry to the knit sweaters and hats, you can take a piece of the country home with you along with books with recipes, history, and folk tales about trolls.

7. Photo Opportunity with the Troll

While it’s been relocated a few times, Puffin’s Roost has also been home to a large troll statue that has become a photo opportunity for many families. It can currently be found near the t-shirts and books, although it can get a bit crowded as other Disney guests are shopping.

All Cast Members in the Norway pavilion are actually from Norway and wear traditional outfits called a Bunad. The red vests, white shirts, and dark skirts or pants are a simpler version of the really thing which is actually more detailed. This helps to embrace the folk lore atmosphere and spirit of the pavilion.

This one was difficult to place in the list as Malestrom was a guest favorite and the new attraction taking its place, Frozen Ever After, doesn’t open until Spring 2016. Norway is only one of two pavilions in World Showcase that have a ride, the other being Mexico. The old attraction consisted of a boat ride on a Viking ship through Norway. Along the way, you encountered trolls who sent you backwards, then forwards, then down a quick drop. The new attraction should follow the same track, but with the scenes taken from the Frozen movie instead. Whether you love it or hate it, it’s going to draw a crowd.

Norway’s Quick Service area, Kringla, is a great place to stop for a sandwich or a snack. It’s especially known for its Lefse (thin potato bread with cinnamon, sugar and butter) and School Bread, a type of pastry. They also serve breakfast sandwiches if you’re looking for a quick early meal.

In the courtyard there’s a stand set up where adults over 21 can buy alcoholic beverages from Norway including Linie Aquavit. Taken as a shot, Cast Members there often say if you can take a shot without making a face, you’re a true Viking. You can also find Carlsberg beer, wine, Voss water, and the usual assortment of soda, water and chips. Are you a true Viking?

The Norway pavilion is also where you can find Akershus Roayl Banquet Hall, a Table Service restaurant. With a combination of buffet and regular table service, guests can try either traditional Norwegian dishes or more familiar American styles while sitting in a medieval-style banquet hall. The food, including the Norwegian meatballs and the salmon, are all delicious and a selection of wine and beer are also available. Check out “8 Reasons You’ll Love Akershus Royal Banquet Hall.”

1. Dine with the Princesses

The highlight of visiting the Norway pavilion is the chance to see a number of Disney princesses all in one place. When guests arrive at Akershus, they are greeted by Belle, then taken to their table. While guests eat, other princesses like Snow White, Sleeping Beauty, Jasmine, and others will walk around from table to table. This is a great way to get some one-on-one time with your favorite princess without having to wait in line.
Norway has a lot of offer Disney park guests and once the new addition is in place, it will become even more popular than it already is. Take the time to stop by and experience the spirit of Norway.