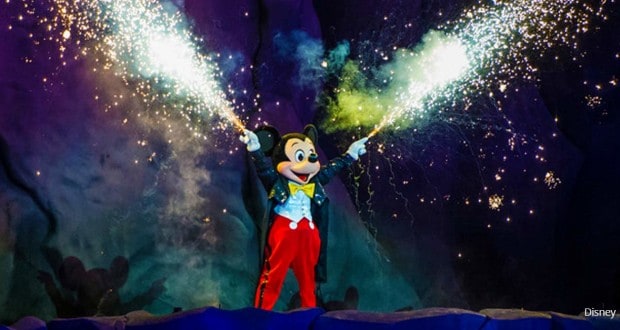 Disney shows are unlike any other show you’ve ever seen. They’re filled magic, stunning detail, and, of course, beloved Disney characters. One of the most popular shows at Walt Disney World is Fantasmic! Located at Hollywood Studios, Fantasmic! is a night time spectacular that combines a number of our favorite Disney films into one mesmerizing show of good versus evil. Putting on this show is no easy task! Here are fifteen stunning facts about this incredible nighttime attraction.

13. Snakes come in all different sizes. Just like from the movie Aladdin, our villain Jafar (Snake Version) appears in Fantasmic and he is 120 feet long, 16 feet tall, and consists of 18 sections.

11. The Walt Disney Resort version of Fantasmic incorporates scenes from the animated movies such as “The Lion King,” “Pocahontas,” “Hercules” and “Mulan.” There are also Villains featured in this fantastic show, including, The Evil Queen from Snow White, Ursula from the Little Mermaid, Cruela De Vil from 101 Dalmations, Scar from The Lion King Jafar from Aladdin, Maleficent from Sleeping Beauty, Hades from hercules, Monstro from Pinocchio, Chernabog from Fantasia, Ratcliff from Pocohontas, and Judge Frollo from The Hunchback of Notre Dame.

10. In the grand finale, 26 Disney characters cruise in front of onlookers in a replica of the Steamboat Willie boat. At over 80 feet long, this show stopping water craft is bigger than Christopher Columbus’ Nina, Pinta and Santa Maria. The boat was built in the Central Shops behind the Magic Kingdom park.

7. For each show there are 46 actors/dancers, 25 crew members, 6 cast members in charge of costumes and 3 stage managers. Now that’s a lot of people for just a 22 minute long show!

5. The water screens in Fantasmic pump 2,400 gallons of water into the air every minute and if called upon, could fill the 500,000-gallon Earffel Tower in less than three hours.

3. Usually there is a giant line to get into the Fantasmic amphitheater. Wouldn’t it be nice if you could just skip that queue? Plan on getting a FastPass for this popular show. You can reserve your FastPass as early as 180 days before your arrival.

2. Do you want to eat a good meal and still be able to see Fanatsmic? Well you’re in luck because the dinner package invites you to relax pull up a chair at a sit-down meal at one of three Hollywood Studios restaurants and reserves seating for you and your family for Fantasmic later that night. Instead of waiting in that long line, you can show up for the show 30 minutes earlier, and be directed to a special seating area just for the dinner package reservations.

1. Fantasmic is shown twice a day 365 days a year, including holidays. If you would prefer to go to the least crowded show I would recommend going to the second showing. The advantage to this is while the first show is going on, you can enjoy rides in the park and the lines won’t be as long, because usually the first showing of Fantasmic is when mostly everyone goes.
Each Fantasmic showing costs a startling $30,000, which means for each and every night per year Disney spends a total of $60,000 per night for the two Fantasmic shows. That adds up to $21,900,000 per year for the Fantasmic show that is shown 365 days a year!

Fantasmic is arguably the most amazing show at Walt Disney World Resort and is very well attended. Make sure to leave time in your vacation schedule to see this stunning, open-air masterpiece which truly captures the magic of Disney! You won’t be sorry!

Fantasmic 2015-07-21
Alyssa
Previous: 17 Things Disney Insiders Would Never Do in Disney Parks
Next: 13 of the Best Places to Take a Mid Day Break in the Magic Kingdom

Alyssa is a high school student from Florida. Ever since she was born, Disney has been in her life. She goes to Walt Disney World at least four times a year, and every year she sails on the Disney Cruise Line. Alyssa loves Disney so much, she has a closet full of Disney themed clothing, her phone case is even Disney themed! 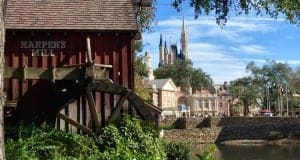