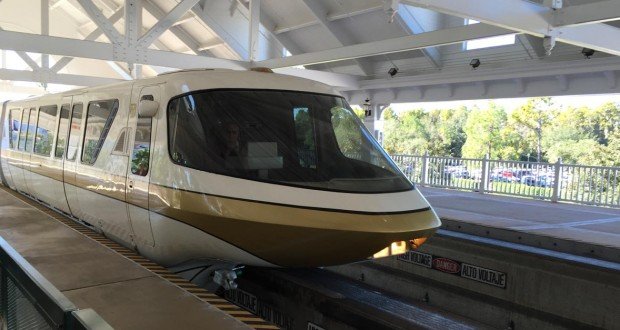 Walt Disney’s vision for the monorail system used in the Disney parks was that it eventually become mode of transportation for the future. Unfortunately, it never really took off outside of the resorts, but each year Disney fans look forward to riding the monorail, whether for regular transportation needs or just for fun. How much do you know about them? To test your knowledge, here are 15 impressive facts about Disney’s monorail system.

15. The WDW monorail system consists of 12 trains (Red, Coral, Orange, Gold, Yellow, Lime, Green, Blue, Silver, Black, Teal, and Peach) while the Disneyland monorail system has three (Red, Blue and Orange). WDW is currently running Mark VI models which have been running since 1989. Disneyland’s monorails are the newest models, Mark VII, and have been operating since 2007.

14. The first monorail was the Mark I used in Disneyland and was designed by Bob Gurr. This model consisted of 3 cars, as opposed to the current 6 cars, and was Monorail Red. During upgrades in models, Monorail Red is usually the first to undergo changes.

13. The Disneyland monorail system was the first of its kind in America when it opened in 1959. The concept was based on the transportation system Walt Disney saw in Germany. The company that built them was ALWEG which built the Mark I and Mark II. Mark III and Mark V were built by Walt Disney Imagineering/WED Enterprises and the Mark VII was built by Dynamic Structures.

12. About 50 million park guests ride the WDW monorail system each year along its 14.7 miles of track. This includes the Express, Resort, and Epcot routes.

11. The WDW Monorail Teal and Monorail Peach trains are constructed using undamaged parts of the Pink and Purple monorails that were involved in the July 2009 crash. Monorail Teal consists on just cars from the crashed monorails and was put into service a few months later in November 2009. It wasn’t until 2011 that Monorail Peach went into service as brand new cars needed to be created and added to the remaining undamaged Pink and Purple cars.

10. There has only been one fatal incident on the WDW monorail system which was on July 5, 2009 when Monorail Pink and Monorail Purple crashed, killing one of the pilots. The other pilot and several passengers were injured. As a result Pink and Purple have been the only retired colors and are not used in any marketing or merchandise. Starbucks even had to redesign its Disney mug where a purple monorail is seen moving through Epcot. The design was replaced with a gray monorail which does not exist.

7. The moving block light system that monitors the distance between each train is called MAPO, named by Walt Disney after the Mary Poppins movie. The profits of the film were used to create a new Disney transportation company.

6. Emergency tests are run daily on all monorail trains. Pilots test the MAPO system by intentionally getting the trains too close together (closer than two train lengths is considered dangerously unsafe) to ensure the on-board computer turns the manual controls off and automatically applies the emergency break.

5. Disney monorail pilots are trained separately from bus and watercraft drivers and captains. The Central Coordinator, “Monorail Central,” operates the entire system and a Cast Member cannot attain this position without having a history of safe operation.

4. The monorail system for all parks is eco-friendly. Run on electricity, the trains don’t emit gases or waste products. The motors are powered by a 600-volt electrical system that runs through a bushbar located on either side of the concrete beam the monorail travels over.

3. It can take up to three weeks to paint a monorail train which is done at the Monorail Shop located on Disney property.

2. Tokyo Disney’s monorails are considered by some to be the first real monorail as the ones used in Disneyland and WDW are shortened versions. These trains are 275 feet long, can carry 571 people at a time (compared to 360), and are driverless. A Cast Member is located at the rear of the train to ensure all passengers have boarded before the doors close.

1. The original “Please, stand clear of the doors,” line followed by its Spanish translation, now a widely quoted Disney phrase, was originally recorded by Jack Wagner who was known as “The Voice of Disneyland.” Since several changes have been added to the WDW routes, new narrators were brought in over the years, but the original closing door warning by Wagner is still used today.

How many did you know? Next time you’re riding the Disney monorail system, impress your friends and family with these interesting facts.

Interested in riding the monorail right now… consider planning and booking your next Disney trip with an Authorized Disney Vacation Planner you can trust like Mickey Travels. They’ll help you get the best price for your vacation, share expert advice and their services are totally FREE! It’s genius!

– Boats, Monorails and Busses Oh My! 4 Things You Need to Know About Disney Transportation

– 20 Unbelievable Facts About the Magic Kingdom