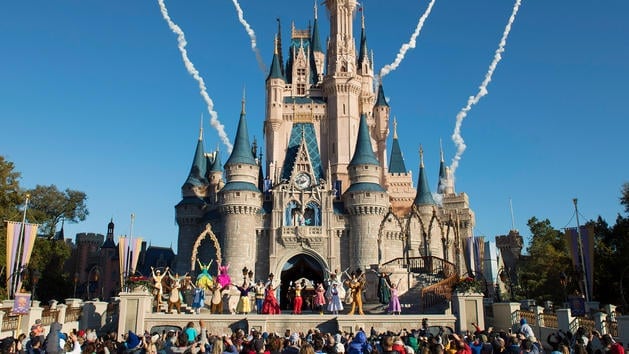 There are countless experiences at Magic Kingdom Park, and it would take far less than “infinity and beyond” to list the things you can afford to miss. But here’s a step-by-step-of-sorts guide to 15 things you’d be as “mad as a hatter” to miss!

When the show is over, turn around and head back to the incredibly-charming Main Street, U.S.A. Grab a coffee, pick up a pastry at Main Street Bakery, and load up on snacks and sugar so that you don’t “glitch out” while exploring this enormous park!

Before you go even further, it’s time to get an obligatory selfie in front of the castle with your favorite pair of Minnie Ears on. But as it will be one of countless pictures you’ll end up taking, consider Disney PhotoPass and Memory Maker ahead of your visit.

So now the exploring begins, but don’t worry, because you don’t have to walk to all the lands. Hop aboard the Walt Disney World Railroad – also an adventure in its own right - and stop off at Frontierland and Fantasyland, where you can make a head-start on your target attractions!

5. The Many Adventures of Winnie the Pooh – Fantasyland

While you’re in Fantasyland, be sure to celebrate this year’s Disney film Christopher Robin with the “silly old bear’s” signature ride. After enjoying the interactive queuing system, climb into a “Hunny Pot” and explore Hundred Acre Wood on this whimsical storybook adventure!