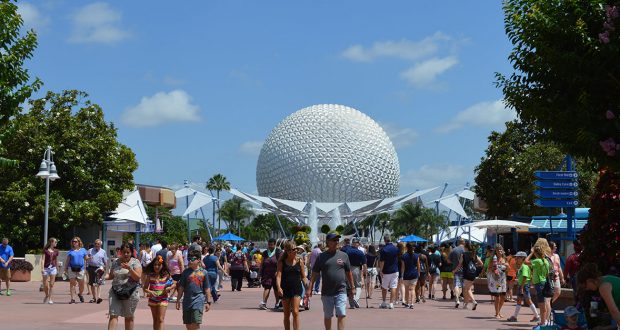 Epcot is Walt Disney World’s second of four theme parks. It opened October 1, 1982 and is dedicated to “edutainment”, or education combined with entertainment. Epcot is divided into 2 parts. In the front is Future World, which has attractions and shows that emphasize technology, history and science. Across the lake is World Showcase, featuring architecture, dining and shopping from 11 different countries around the world. Walt Disney first envisioned E.P.C.O.T as an Experimental Prototype Community of Tomorrow. Much of Future World stems from those early ideas from Walt Disney. Here are 20 Delightful Facts about Epcot’s Future World!

1) Spaceship Earth, the visual and thematic centerpiece of Epcot, weighs 16 million pounds, measures 165 feet in diameter and encompasses 2.2 million cubic feet of space. The outer “skin” of Spaceship Earth is made up of 11,324 aluminum and plastic-alloy triangles.

2) At Spaceship Earth, Mickey Mouse is hidden in his own constellation just beyond the attraction’s loading area. On your next trip, see if you can find him!

3) Originally, there were no Disney characters in Epcot, due to its thematic vision. Disney CEO Michael Eisner knew guests wanted to see their favorite characters, so Mickey and friends started popping up in Epcot in the 1980’s. You can see your Disney friends at the Character Spot in Future World.

4) The fountain at Epcot’s Innoventions Plaza can shoot water 150 feet in the air – almost as tall as Spaceship Earth! If all of the shooters were fired at once, there would be 2,000 gallons of water in the air.

5) The magical fountains have been part of Epcot since opening day. In fact, as a symbolic gesture of international cooperation and understanding, representatives from 22 countries each poured a gallon of water from their homeland into the fountain.

6) Several times per hour, guests can watch and listen to the spectacular “Fountain of Nations Water Ballet”, complete with a musical soundtrack.

7) The ride technology for the Soarin’ attraction was based on an erector set model created by Walt Disney Imagineer Mark Sumner. Disney recently updated this attraction to Soarin’ Around the World.

8) It took more than 650 Walt Disney Imagineers more than 350,000 hours (the equivalent of 40 years of time) to develop Mission: SPACE. The Imagineers’ efforts took place over a five-year period. In association with former NASA advisors, astronauts and scientists, Walt Disney Imagineering developed Mission: SPACE as the first ride system ever created to take guests straight up in simulated flight.

9) At Mission: SPACE, there are 13 quotes by space explorers and visionaries on the attraction’s wall of honor. The most recent was added in September 2007 by teacher-turned-astronaut Barbara Morgan, reading “Reach for your dreams . . . the sky is no limit.”

10) Mission: SPACE offers two variations, one that spins like a real rocket (orange) and the less-intense no-spin (green).

11) At nearly a mile long and reaching a top speed of 65 mph, Test Track is the longest and fastest ride at a Walt Disney World theme park.

12) The body of water at The Seas with Nemo & Friends provides a home to 3,000 fish and other sea creatures and contains 5.7 million gallons of water, one of the largest man-made ocean environments in the world.

13) More than 30 tons of fruits and vegetables grown at The Land pavilion each year are served in Walt Disney World restaurants.

14) Living with the Land has a “tomato tree” that is the only one of its kind in the United States. The massive plant has produced a world-record harvest of more than 32,000 tomatoes from a single vine.

15) There’s a one-hour walking tour called “Behind the Seeds” that will take you into the Greenhouse area you only get to pass by on the boat ride. A Disney horticulturist will explain the various growing methods used there, as well as hydroponics, pest management, farm fishing and more. They’ll also answer questions and show you the plants and fish “up close and personal.”

16) You can see life-sized dinosaurs at the Universe of Energy: Ellen’s Energy Adventure. Ellen DeGeneres and Bill Nye the Science Guy take you on a journey to understand where fossil fuels come from.

17) The Imagination Pavilion has been a part of Epcot since it opened. The central theme is all about using or stretching your imagination. It begins on the outside of the building with the upside down waterfall and jumping water pods! Inside, you will enjoy a whimsical look at how our senses play a part in our imagination with Dr. Nigel Channing and a cute purple dragon named Figment.

18) The Coral Reef restaurant allows you to dine with the fishes. You will enjoy spectacular views of a living coral reef—and the 4,000 amazing sea creatures who call it home!

19) MouseGear in Future World is one of the largest gift shops in all of Walt Disney World!

20) If you happen to be in Innoventions Plaza at night, be sure to look DOWN! The walkway is laced with fiberoptics that light up and slowly fade away, enchanting both children and adults.