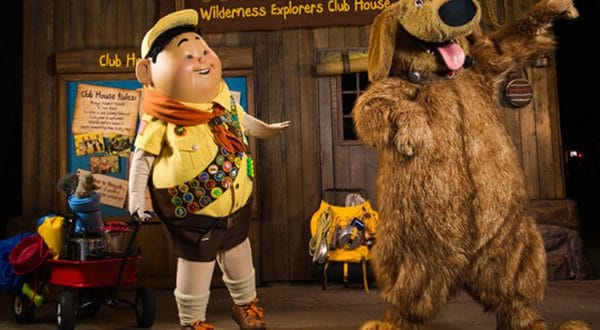 20 Disney Characters You Can Only Meet in Animal Kingdom Park

Disney World Resort is filled with Disney characters. Naturally, though, there are some that are exclusive to the parks they inhabit. And here are those you’ll only find in Animal Kingdom Park.

Meet The Lion King’s wise-but-wacky baboon Rafiki, and share with him your adventures. But don’t forget to ask for a picture and an autograph – that way you’ll officially be a part of the “circle of life”!

Speaking of those attuned with the spiritual side of nature, listen as Pocahontas tells you about her home world. And if you arrive at Character Landing by canoe, she’s “just around the river bend”.

Whilst on Discovery Island, meet Dug from Disney-Pixar’s UP, who’s busy earning new Wilderness Explorer badges, but not too busy to hang out with you! So get your autograph book – or even your own badge – at the ready!

Where there’s Dug, there’s Russell. And don’t worry if you miss them both, as they’re also in UP! A Great Bird Adventure. Just check times, because if you miss that, too, you’ll feel as deflated as, say, a hundred burst balloons!

Behold the Festival of the Lion King – the vibrant reinterpretation of the classic movie in Animal Kingdom Park’s Africa. You might not be able to “meet” Simba, but if the amazing audio-animatronic still doesn’t convince, check out Africa’s real lion king…

It makes sense for Timon to make an appearance in this show, too, because where would The Lion King be without “Hakuna Matata”? It’s not a backstage encounter, but you will get to experience him take the lead vocals.

You needn’t scour the earth’s oceans in search of everyone’s favorite clownfish – he’s already at Animal Kingdom Park in Finding Nemo – The Musical. It’s not exactly a character greeting, but then he does live underwater…

There’s no room for the wicked Colonel Quaritch here, so watch as a Pandora Scientist pilots the awesome Pandora Utility Suit and explores Mo’ara Valley. You can grab a photo, but an autograph might prove tricky for them!

For an insight into a bug’s life, check out 3D film and live show It’s Tough to be a Bug! presented by a CGI Flik inside the Tree of Life. Flik himself can sometimes also be found on the Discovery Island Trails!

If there’s any other character who’s as chilled-out as Timon, it’s The Jungle Book’s lovable Baloo. So pay a visit to Upcountry Landing and forget all about your worries and your strife!

Baloo isn’t alone, either – he’s in the presence of the “king of the swingers”. King Louie is a little coco-nuttier than Rafiki, but he’ll make you feel like a “Jungle VIP” nonetheless!

You’ll always see Pluto in one of the resort’s big shows or parades, but here you can meet him. Donald Duck’s Dino-Bash is a prehistoric party filled with Disney characters, including your favorite yellow pooch!

To say that Dino-Sue isn’t a character would be a lie. She’s a replica of the most complete T-Rex skeleton ever discovered, and is named after fossil hunter Sue Hendrickson – so she’s even based on a real person!

If you’re a fan of DuckTales, you’ll be glad to know that Scrooge can be found at Donald’s Dino-Bash. He won’t be swimming through his fortune, but you can grab a priceless selfie and an autograph.

These days, the likes of Launchpad McQuack barely get a look-in. But don’t worry, because you can catch him at Donald’s Dino-Bash. And though this is a prehistoric-themed event, he’s still in that timeless aviation attire!

Meet Doc McStuffins at her own animal hospital-like part of Conservation Station. The little ones will love a selfie and an autograph with their favorite doc – and so will you!

Flik isn’t the only rare bug who can sometimes be discovered on these trails, as Atta has been seen here, too! And whilst there’s always a chance you might see her again, just watch where you step…

3. An Avatar – Pandora – The World of Avatar

Don’t miss the sleeping avatar in the tank in the Pandora Conservation Initiative labs. Though they’re sleeping – or in this case, in stasis – where else in Disney World Resort are you going to meet an avatar?

There’s another reason why this ride was renamed DINOSAUR many years ago. Not only will you recognize that it’s inspired by the Disney movie Dinosaur, it even features audio-animatronic versions of Iguanadon Aladar and one of the villainous Carnotaurs.

Pinocchio’s Jiminy Cricket has been known to grace Rafiki’s Planet Watch on the annual event Earth Day, which makes him a pretty exclusive character. Just be sure to “wish upon a star” for his return next year!

Even when you’re seeing your favorite character in virtual or audio-animatronic form, it’s as much them as it is when they’re in costume. After all, it’s your imagination that brings them to life…