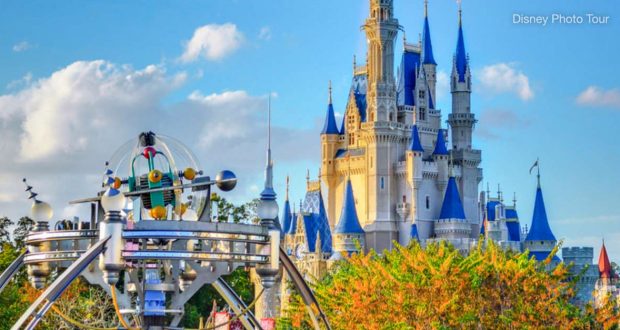 2) Size – The original Disneyland Park in California covers around 85 acres. The Magic Kingdom features the same basic layout, but is significantly larger at 107 acres. Even so, it’s still the smallest of Walt Disney World’s four theme parks!

3) Parking lot – The Magic Kingdom parking lot is huge! Fortunately, you aren’t expected to walk all the way to the front. There are trams in use to get you from the lot to the Transportation and Ticket Center. From there, you can take a boat or monorail to the Magic Kingdom entrance. More than 12,000 cars can park in the Magic Kingdom’s sprawling parking lot, which is larger than the theme park itself at 125 acres.

6) How tall? – Cinderella Castle stands at 189 feet tall, compared to Sleeping Beauty Castle at Disneyland which is just 77 feet tall. This is just short enough to keep it below the Federal Aviation Authority’s 200-foot limit, beyond which buildings must display a flashing red light at the top.

7) Stonework – No stonework was used to create Cinderella Castle, despite its appearance. The building’s shell is made out of fiberglass.

8) Inside the castle – The mosaic murals in Cinderella’s Castle were designed by Dorothea Redmond. There are 500,000 tiles in 500 different colors, including some made of 14 karat gold.

9) Hub and Spoke – The Magic Kingdom, like Disneyland, is set up in a hub and spoke system. The hub is located in front of Cinderella Castle and branches out to six different lands.

10) Lands – Although it has changed somewhat during the years, the Magic Kingdom currently has six “lands”. Branching out from the central hub is: Main Street USA, Adventureland, Liberty Square, Frontierland, Fantasyland and Tomorrowland.

12) Trash – When Walt Disney was planning Disneyland, he visited other local amusement parks and noticed that guests would walk only a few steps before dropping trash on the ground, rather than in a trash can. At the Magic Kingdom, you’ll notice there is a trash can every few feet. The Magic Kingdom’s trash collection system can handle up to 50 tons of trash per day. This is sent through the underground Automated Vacuum Assisted Collection System (AVACS) at 60 miles per hour to a central location for processing.

13) Oldest attraction – The oldest attraction at the Magic Kingdom is the Prince Charming Regal Carrousel. The ride was originally built in 1917 by The Philadelphia Toboggan Company. Ninety of its horses are originals, made of hand-carved wood. There are 11 fiberglass horses added by Disney.

16) Liberty Tree – The enormous Liberty Tree in Liberty Square is a live oak tree, and commemorates the meeting place of the Sons of Liberty (as seen in Disney’s Johnny Tremaine). It was transplanted from elsewhere on Walt Disney World property, is more than 135 years old and weighed some 35 tons when it was moved.

17) The Liberty Bell – Also on Liberty Square, the replica of the Liberty Bell was built from the same cast as the original in Philadelphia, Pennsylvania.

18) Trains – The four narrow-gauge locomotives used on the Magic Kingdom Railroad were built between 1916 and 1928 by the Baldwin Locomotive Works for Ferrocarriles Unidos de Yucatán in Mexico. One of the trains is named after Walt Disney’s wife, the Lilly Belle.

19) World’s Fair – Walt Disney’s Carousel of Progress debuted at the 1964/65 World’s Fair in New York. It was then moved to Disneyland, where it continued to be sponsored by General Electric. Eventually, the company decided that most Californians had seen the attraction, and asked for it to be moved to the Magic Kingdom. It opened there in 1975 and can still be seen today.

20) E.P.C.O.T. – A reminder of Walt Disney’s original Experimental Prototype Community of Tomorrow can be found in the Magic Kingdom’s Tomorrowland. The Tomorrowland Transit Authority (aka the WEDway Peoplemover) is a revolutionary transportation system, or at least that’s how it was thought of when it opened in the Magic Kingdom in 1975. Using linear induction motors, the vehicles glide with ease in an environmentally friendly manner. Each section has five cars that travel at 10 feet per second except at the loading and unloading station where it travels at 2.7 feet per second.