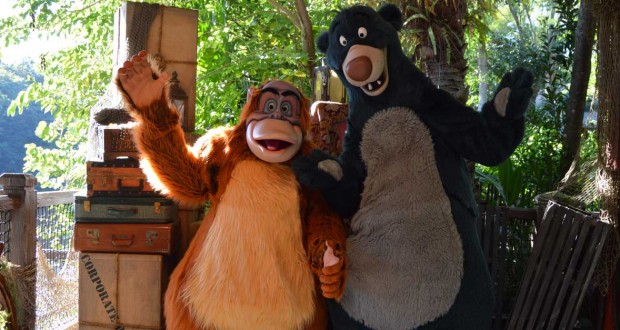 Some characters are relatively easy to find in Disney parks. Though their lines might be long, you’ll never struggle to find favorites like Chip and Dale, Donald, Mickey, Pluto, and Goofy across the parks. There are some characters, however, who regularly appear in only one park. Some keen readers have noted in previous articles that there are exceptions to information about where characters can be seen, and that is certainly true. At times, you’ll find characters engaged in random trainings, or during pop-up events (like dance parties or other unofficial greeting experiences) that are not regularly scheduled. What follows refers specifically to the “regularly scheduled” greets for characters meeting in only one park.

These loveable big guys from The Jungle Book are only available for greeting at Animal Kingdom. You’ll find them across from the Flights of Wonder show. The line forms on the boat dock area.

This scout and his dog from the movie Up don’t really have any park presence other than their meet and greet.

The historical heroine only meets with guests officially near. That being said, I have seen her (along with the raccoon, Meeko) at a pop-up character event at Hollywood Studios.

Rafiki has two official greeting locations, both within Animal Kingdom. The first is near the front entrance, just past security. Look for him in the morning. You can also see him at Rafiki’s Planet Watch. You’ll have to take the Wildlife Express Train to get there.

3 Characters You’ll Only Find at Epcot:

Some will argue, understandably, with Belle being an Epcot exclusive. She greets guests in France in the World Showcase. This is her only actual “regular” meet and greet throughout the parks. That being said, you will certainly see her in Enchanted Tales with Belle at the Magic Kingdom, and yes, your little one can get a picture with her; it’s just not considered a meet and greet. She also appears at princess dining experiences.

Duffy is Mickey’s traveling companion, so it makes good sense that he can be located at the entrance to the World Showcase at Epcot. You’ll find his greeting location near the FastPass+ viewing area for IllumiNations and the boat launch.

Mulan can be found in the World Showcase’s China pavilion. She is another one that you might be lucky to spot during pop-up character experiences (again, try Hollywood Studios before a Fantasmic! performance), but finding her at Epcot is the only reliable way to find her.

Hollywood Studios- 16 Favorites You Can Only See Here!

Hollywood Studios is light on attractions for little ones, but where it really shines is in the variety of some of the beloved newer Disney characters that your children probably love. The current generation of Disney kids is hooked on Disney Junior and Disney Channel in general, and you’ll find plenty of their favorites available to meet at Hollywood Studios.

Popular among kids and adults alike, Mike and Sully from Monsters, Inc. and Monsters University meet guests exclusively at Hollywood Studios. You’ll find them near the Streets of America, close to the former exit of the Backlot Tour.

Do your kids love watching Phineas and Ferb on the Disney Channel? If so, don’t miss your chance to meet the stars themselves at Hollywood Studios. You can see them near the Streets of America.

Two main characters from The Incredibles, Frozone and Mr. Incredible, can be found in the Magic of Disney Animation building (the same place you’ll find Sorcerer Mickey). Your only other opportunity to see these guys is at the Incredibles Dance Party in Tomorrowland at the Magic Kingdom, which is not considered a meet and greet.

Lightning McQueen and Mater are sure to delight your little Cars fan! You can find them exclusively at Hollywood Studios, near the Streets of America- right next to Mama Melrose).

Buzz Lightyear and Woody can be found at other parks (though not together), but the Green Army Men aren’t typically. This is a character greeting opportunity that can be very interactive, as the army men love to imitate guests. Also note that the Army Men do not have a specified spot that they stand in- they roam the Pixar Place area near Toy Story Midway Mania.

Move over Anna and Elsa, you aren’t the newest on the block anymore! Are you interested in meeting Disney’s newest stars from Big Hero 6? If so, you’ll want to head over to the Magic of Disney Animation building where you’ll find the duo meeting guests.

Mickey can be seen in every park- rightfully so, since he’s Mickey Mouse after all. But Mickey is particularly impressive in his sorcerer garb, so you might want to consider getting on line early to see him. His location inside the animation building always seems to attract a heft line.

Also not to miss- make a reservation for breakfast or lunch at Hollywood and Vine. If you do, you’ll meet Handy Manny, Doc McStuffins, Jake, and Sofia the First! (Handy Manny and Doc McStuffins don’t have their own designated meet and greets currently, so this is your best bet if you want to spend time with them!)

– Wild about Characters: 10 Meet & Greets You Must Do at Animal Kingdom

– 8 Great Character Interactions You May Be Missing at Epcot