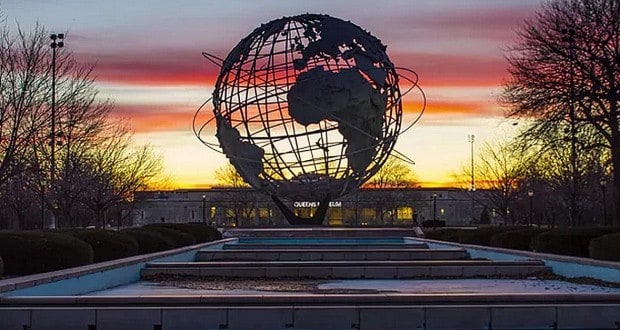 I recently visited the grounds of the 1964-65 World’s Fair in Queens New York with one goal… to shoot an epic time lapse of the sun setting behind the iconic Unisphere. Arriving on a very cold January day, it took my breath away as I caught my first real glimpse of the Unisphere. A massive 12-story high, spherical stainless steel representation of the Earth, (sound familiar?) designed as the themed symbol of the Fair and commissioned to celebrate the beginning of the space age, the Unisphere was conceived and constructed to promote “Peace Through Understanding.” It was dedicated to “Man’s Achievements on a Shrinking Globe in an Expanding Universe.”

When I look at the history of the World’s fair, it’s architecture, layout and iconic symbols; it is a nearly perfect representation of what EPCOT is today. It’s hard to imagine what Walt Disney World and Disneyland would be like today without the many influences Walt harvested from the 1964-65 Worlds Fair and perhaps more importantly, how the fair’s influence affected the ideas and motivation Walt Disney had during that time. EPCOT has essentially become today… A permanent world’s fair, showcasing an international marketplace of pavilions and exhibitions to treat it’s guests to the tastes, sights and sounds of the many cultures of the world and to showcase new technological advances and innovations. In addition to the influence the Worlds Fair’s international allure had on EPCOT, the Disney Magic we know and adore today was tested and showcased in the public eye for 2 years during the fairs tenure. Walt Disney contributed to 4 of the many dozens of pavilions featured at the fair and used them to design and perfect his system of audio animatronic characters that have become a staple of Disney technology and innovation. Here is the breakdown:

Disney fans are well familiar with the Pepsi Pavilion… A salute to UNICEF, although fans best know it as the attraction “it’s a small world” (all lower case, naturally). It was a surreal journey with animated dolls and animals that frolicked in a spirit of international unity accompanying a boat ride around the world where each of the animated dolls had an identical face. (It’s all about unity) After the fair, in 1966, the attraction was relocated to Disneyland and because of it’s huge success at the fair, was built for the opening of Walt Disney World in 1971 and later added by default to Disneyland Tokyo, Disneyland Paris, and Disneyland Hong Kong. It’s safe to say that without the World’s fair there would probably have never been “it’s a small world.”

The Progressland Pavilion was a large graceful building with a curving 200-foot-wide dome, supported by a unique pattern of swirling circular pipes. It was eye-catching by day . . . and dazzlingly colorful by night. The message of this pavilion was clear… to show the role of electricity in the progress of man. The evolution of progress was something Walt Disney had always been fascinated by (Spaceship Earth) and General Electric knew how important it would be to pack as much interest and entertainment as possible inside the 3 levels of the Progressland exhibit so they enlisted the master showman of them all — Walt Disney. Walt used all of his resources to make Progressland the number one attraction at the Fair. Specifically designed for this pavilion, Walt created the Carousel of Progress… a revolving auditorium where guests viewed an audio-animatronic presentation of the progress of electricity in the home. After the fair was closed in 1965 and because of the huge success of the attraction, The Carousel of progress was dismantled and like it’s a small world, moved to Disneyland in California and later built for Walt Disney World in Florida.

The state that Abraham Lincoln called home displayed the largest collection of Lincolniana ever assembled for an international exposition. In addition, this was one of the most important venues that Walt contributed to. Much of the latest animatronic technology Disney had been working on would debut in the stage show Walt Disney created called “Great Moments with Mr. Lincoln.” A life-sized animated figure that looked acted and spoke like Abraham Lincoln would be the prime feature of the pavilion. Walt originally conceived of a show that would pay tribute to all U.S. Presidents, but the technology at the time would not permit a show on the scale Disney wanted. During the second season of the World’s Fair, a duplicate version of the show opened at Disneyland on July 18, 1965 and ultimately the original concept of the presidential tribute was later built as The Hall of Presidents at Walt Disney World’s Magic Kingdom.

One of the largest pavilions at the world’s fair, Ford Motor Company presented “Ford’s Magic Skyway”, a WED Imagineering designed pavilion, which was the second most popular exhibit at the fair. It featured 50 actual motorless convertible Ford vehicles; including Ford Mustangs in an early prototype of what would eventually become the People Mover ride system. Audience members entered the vehicles on a main platform as they moved slowly along the track. The ride moved the audience through scenes featuring life-sized audio-animatronic dinosaurs and cavemen. Walt Disney was responsible for helping develop the motorized vehicles that ran through the pavilion. That system was re-used at Disneyland as the People Mover and eventually added to Walt Disney World for it’s opening in 1971. Dinosaurs from the exhibit are still in view in Disneyland’s Primeval World, an exhibit seen from the Disneyland railway.

So there you have it! An international exposition, peace through understanding, A unified planet and a pedestal to showcase new and evolving technologies. Disney’s work for the 1964-1965 World’s Fair continues to fascinate fans of both Disney and World’s Fairs. Maybe it’s the influence on today’s theme parks – from a simpler time when anything seemed possible – that draws us back to these 4 special groundbreaking attractions. Disney Imagineer Tony Baxter is quoted as saying “The World’s Fair was critical for Walt Disney, because he used it as a proving grounds for Disney Imagineering to develop bigger and better shows, and to advance animatronics beyond the Enchanted Tiki Room. I consider the fair to be the first golden era of Imagineering attractions. The Omnimover system, the PeopleMover, and sophisticated audio-animatronics were all developed for the fair. It was a giant leap forward in what could be done.”